Impact Wrestling TNA One Night Only Special was a professional wrestling television event that was produced by Impact Wrestling taped on March 6, 2020 and aired on March 31, 2020. The event was held at the Coca Cola Roxy in Atlanta, Georgia and was was released exclusively on AXS TV. 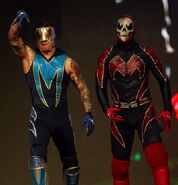 Retrieved from "https://prowrestling.fandom.com/wiki/Impact_Wrestling_TNA_One_Night_Only_Special?oldid=1670178"
Community content is available under CC-BY-SA unless otherwise noted.