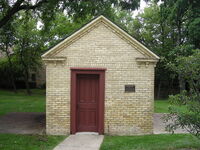 Hoffman Estates is a northwestern suburb of Chicago in Illinois. The village is located primarily in Cook County with a small section in Kane County, Illinois. As of the 2000 census, the village population was 49,495 and estimated to be 52,520 in 2003. The village was incorporated in 1959.

Retrieved from "https://prowrestling.fandom.com/wiki/Hoffman_Estates,_Illinois?oldid=476978"
Community content is available under CC-BY-SA unless otherwise noted.