A headbutt is a strike with the head, typically involving the use of robust parts of the cranium as area of impact. Effective headbutting revolves around striking a sensitive area with a less sensitive area, such as striking the nose of an opponent with the forehead. A misplaced headbutt can cause more damage to the headbutter than the headbuttee.

Mechanics of the headbutt

Headbutts can be used from close range such as from the clinch, or on the ground. They are typically applied to the head of the opponent, since the head is often a readily available target and has several sensitive areas. An effective headbutt can be performed with a forward, rising, sideways or backwards motion; each being effective from different positions.

Parts of the cranium with thick bone and high local curvature make for good weapon areas, and these include the forehead near the hairline, the outboard curved part of the parietal bone, and the occiput. Ideal targets are usually the fragile areas of the head, including the bridge of the nose, the cheekbones, the hinge area of the jaw, the temple, and the top edge of the eye socket.

Hitting the opponent's teeth or mouth is likely to cause mutual damage. The chin of the enemy is also a bad position to headbutt.

Headbutting is considered an illegal technique in nearly all combat sports, with a few exceptions such as Burmese boxing, professional wrestling, and some mixed martial arts competitions such as Finnfight. Reasons for illegality vary, from specific technical reasons to general inappropriateness: headbutts are prone to cause lacerations, often deeper ones than from punches

Even though generally banned in sport application, several martial arts and self-defense systems do however include headbutting in the curriculum. In some rare systems, such as Eritrean Testa, headbutting is of major focus or is the sole focus.

Headbutts in other sports

Headbutts are generally forbidden in most sports.

On March 16, 1996, Dennis Rodman of the Chicago Bulls headbutted referee Ted Bernhardt during a basketball game in New Jersey.

Headbutting has recently received some attention due to its use by some players during FIFA World Cup matches. Headbutting is considered illegal in association football and is punishable by a red card. In the 1998 FIFA World Cup, Ariel Ortega headbutted Dutch keeper Edwin van der Sar in the Argentina vs. Netherlands quarterfinal match and was sent off. In the 2006 FIFA World Cup another Dutch player, Mark van Bommel was headbutted, this time by Luís Figo in the Portugal vs. Netherlands Round of 16 match, but Figo received only a yellow card for his offense. In the final match against Italy, Frenchman Zinedine Zidane headbutted the Italian Marco Materazzi in the chest, for which he received a red card and a subsequent three match ban (although the red card meant Zidane could play no further part in the match, the three-match ban had no effect since he had previously announced his intention to retire after the World Cup).

In the Stratford horse races on July 23, Paul O'Neill headbutted his John O'Shea-trained City Affair during the pre-race parade ring after losing control of the uncooperative horse. O'Neill later apologized but received a one-day ban from the Horseracing Regulatory Authority.

Whilst this is not yet common, it is far from unheard of for people to headbutt others as a display of affection. Typically, such headbutts will be aimed at the chest, stomach or arms; they will be soft and gentle so as not to inflict pain. The origins are unknown, but it is probable that the practice is influenced by the nuzzling of pets, such as dogs, to their owners. 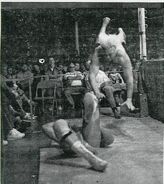 Flying head butt
Add a photo to this gallery

Retrieved from "https://prowrestling.fandom.com/wiki/Head_butt?oldid=927614"
Community content is available under CC-BY-SA unless otherwise noted.