The inaugural television tapings the company will hold are scheduled to take place at the The Orleans Arena in Las Vegas, Nevada. The first three events are scheduled to take place on July 24, 2015, August 21, 2015 and October 23, 2015. Throughout May 2015, GFW announced their roster for the first TV tapings. On May 12, GFW announced that four champions will be crowned at the July 24 tapings in Las Vegas. On July 9, 2015, Jeff Jarrett announced that the name of the GFW TV show will be Amped. 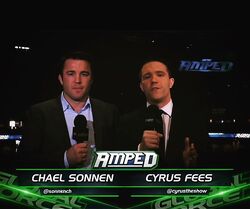 Retrieved from "https://prowrestling.fandom.com/wiki/GFW_Amped?oldid=979509"
Community content is available under CC-BY-SA unless otherwise noted.