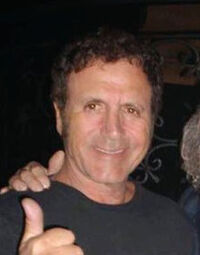 Frank P. Stallone, Jr. (July 30, 1950) is an American actor, singer/guitarist and Golden Globe and Grammy Award-nominated songwriter. He has appeared in many Hollywood films and television. He is the younger brother of Sylvester Stallone.

Stallone was a contestant on Hulk Hogan's Celebrity Championship Wrestling, a new reality competition series on CMT that follows 10 celebrity contestants as they are trained to be professional wrestlers. He was the second celebrity eliminated and was also eliminated in the second episode.

Retrieved from "https://prowrestling.fandom.com/wiki/Frank_Stallone?oldid=1505137"
Community content is available under CC-BY-SA unless otherwise noted.