Final Resolution is an annual professional wrestling pay-per-view (PPV) event held by Total Nonstop Action Wrestling in the month of December. The event was originally scheduled to take place every January until 2008, when TNA moved the event to December of that year, meaning two Final Resolution's took place in 2008. 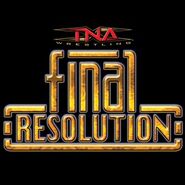 Retrieved from "https://prowrestling.fandom.com/wiki/Final_Resolution?oldid=1591791"
Community content is available under CC-BY-SA unless otherwise noted.