When asked what he was going to do about being the odd man out of the World Heavyweight Championship hunt, Shawn Michaels picked the right place and right time to make perhaps the loudest and most emphatic statement of his storied career. With one kick to the face of Chris Benoit and one signature to a contract not meant for him, Michaels made it clear that his personal journey for the World Heavyweight Championship was not to be disrupted, no matter what he had to do.

On RAW, moments after Benoit scored one of the biggest victories of his career when he forced Ric Flair to tap out, the moment was overshadowed by horror and confusion for the man who survived 29 other men in a record-setting Royal Rumble victory. Just as he was about to sign the contract to meet Triple H at WrestleMania XX, Michaels entered the ring and announced that he will finish what he started with Triple H on March 14 whether anybody else likes it or not. When Benoit refused Michaels' attempt to convince him not to participate in the match, HBK found his way into the mix when he hit Benoit with his Sweet Chin Music and signed the contract instead of Benoit, leaving RAW General Manager Eric Bischoff in a legal nightmare.

With Benoit legally earning an opportunity at Triple H at WrestleMania via his Royal Rumble victory but Michaels’ name on the contract, who would face Triple H at WrestleMania XX? At this point, there was no answer as Bischoff consulted with his attorneys. However, Benoit would have his shot at revenge next week on RAW when he was scheduled to face Michaels one on one.

Revenge quickly became the theme of the night on RAW as Mick Foley made it clear that his rivalry with Randy Orton was not finished. He even took it to a new level when he revealed that he was not the only one to walk away from a challenge. Foley uncovered information that Orton – a former United States Marine – once went AWOL and was discharged as a result. Using the information to challenge Orton, Foley stated that if Orton wants to claim to be a legend, the only way he can do so is at WrestleMania XX with a match against Foley. However, Orton quickly turned the tide when he challenged Foley to meet that very moment in the catering area. There, Foley was met by not only Orton, but Ric Flair & Batista as well and he suffered a savage assault that included being thrown through a table by Batista. At the end of the evening, after Orton defeated Booker T and Rob Van Dam in a Triple Threat Match, Foley limped his way to ringside and challenge Orton again, only to suffer an RKO.

Speaking of revenge, would there be revenge attempted on Kane from beyond the grave? After defeateding the Hurricane, Kane was stunned when the paranormal events that he has recently faced began once again, this time with a message—In 34 days, the dead will rise again. With a loud gong, Kane was left with a question that may burn him until WrestleMania ... was this the work of the Undertaker?

In other action, Goldberg's efforts to gain revenge on Brock Lesnar seemed to be tripped up when Mr. McMahon made a shocking appearance on RAW that was overshadowed only by the site of SmackDown General Manager Paul Heyman in the RAW ring. After a confrontation in the ring that included Heyman threatening Goldberg if Goldberg should interfere with Brock Lesnar's match at No Way Out, Goldberg earned a suspension. Mr. McMahon declared that Goldberg would be suspended for attempting a Spear on McMahon – a Spear that Goldberg accidentally hit Stone Cold Steve Austin with. Mr. McMahon said to Bischoff that if Goldberg does more than merely observe Lesnar's match at No Way Out, it would be bad news for Bischoff. 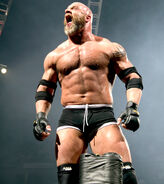 Retrieved from "https://prowrestling.fandom.com/wiki/February_9,_2004_Monday_Night_RAW_results?oldid=1556242"
Community content is available under CC-BY-SA unless otherwise noted.