February 15, 2017
The February 8, 2017 Edition of NXT is a Professional wrestling television show of the WWE, which took place at the Full Sail University in Winter Park, Florida on February 1, 2017.

Harv & Gurv Sihra brought their usual Bollywood flair to the NXT ring this week. Unfortunately for The Bollywood Boyz, they found themselves standing across the ring from Alexander Wolfe and the monstrous Killian Dain of SAnitY, making his in-ring debut. The 300-pounder known as The Beast of Belfast needed no help from his partner to win this match. Dain was a one-man demolition crew, steamrolling both Bollywood Boyz before putting Harv down for the three-count with the Ulster Plantation.

After the battle, Nikki Cross went into a rage, declaring that she wants another battle with NXT Women's Champion Asuka. Eric Young, on the other hand, sent a message to Tye Dillinger in the aftermath of their battle at TakeOver: San Antonio: “You belong to us.”

Billie Kay & Peyton Royce have been riding high since being named 2016's Breakout Stars of the Year in the NXT Year-End Awards. However, Liv Morgan knocked the self-proclaimed “iconic duo” down a peg this week, using a collision between the two to her advantage and rolling up Kay to win the match.

Scott Dawson & Dash Wilder have their sights set on becoming three-time NXT Tag Team Champions, but standing in their way on the road back to championship glory was 650 pounds of Heavy Machinery. Tucker Knight & Otis Dozovic muscled The Revival around, but Dawson & Wilder used their smarts (and a few dirty tricks) to put the big men on the defensive. Knight soon found himself on the receiving end of a devastating DDT from Dawson that gave The Revival the victory.

Afterward, the 2016 NXT Tag Team of the Year grabbed the microphone and called out Paul Ellering's Authors of Pain, challenging the reigning NXT Tag Team Champions to a match at TakeOver: Orlando on the eve of WrestleMania 33. The champions quickly emerged, with Ellering stating that anyone who stepped up would be ground to dust by Akam & Rezar. The Revival left the NXT Universe questioning that claim, as they attacked The Authors from behind, leaving the champions reeling as they hurried away before The Authors could retaliate.

Fresh off his victory over Shinsuke Nakamura at TakeOver: San Antonio, newly crowned NXT Champion Bobby Roode reveled in his moment, rubbing it in that he had proven himself right in Texas. The Glorious One declared his win the greatest moment in NXT history.

This match was made by NXT General Manager William Regal after SAnitY ambushed Tye Dillinger earlier in the night, when The Perfect 10 made it clear he would not be joining Eric Young's crew. Roderick Strong and No Way Jose rushed to Dillinger's aid, evening the odds against the anarchists.

Dillinger, Jose & Strong wasted no time in going right after SAnitY, forcing the rebels to regroup quickly. The Perfect 10 and his two partners had SAnitY on the ropes on several occasions, but the bout quickly devolved into anarchy, which Eric Young and his crew thrive on. Nikki Cross got involved in the fray, taking out Dillinger and giving Killian Dain the chance to smash Strong into the canvas with his 300-pound frame. The attack allowed Young to sneak in and steal the victory for SAnitY. 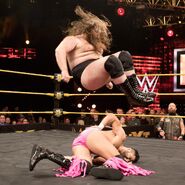 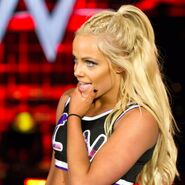 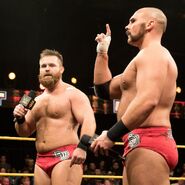 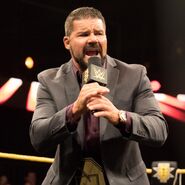