February 12, 2014
The February 5, 2014 Edition of Main Event is a Professional wrestling television show of the WWE, it was taped at the Wells Fargo Arena in Des Moines, Iowa on February 4, 2014.

WWE Main Event kicked off with Fandango prepared to battle former WWE Champion The Miz. However, before the match even started, Santino Marella made his way to ringside and joined Alex Riley and Tom Phillips on commentary. And Santino did not come alone; heinvited NXT's Emma to join him. Of course, Emma's appearance did not go over well with Summer Rae, who was defeated by the rookie in a dance competition on Raw earlier this week.

The Australian-born beauty was awkwardly excited to be a part of WWE Main Event as the action between Fandango and The Miz got underway. Almost immediately, the battle's intensity reached a fever pitch as the self-proclaimed Most Must See WWE Superstar traded momentum with the dancing dynamo and maintained an advantage early in the contest. The Miz remained relentless and even took a moment to join Emma in her patented dance moves.

When Fandango managed to take control of the contest for a time, the former WWE Champion displayed resilience and shifted the contest back in his favor. Nevertheless, the dancing Superstar's aggression kicked into overdrive, driving The Miz shoulder-first into the ring post. Fandango shifted his strategy and focused on his opponent's vulnerable shoulder.

The former WWE Champion remained resilient and was intent on locking Fandango in the Figure-Four Leg Lock. Resisting the hold, Fandango put up a formidable fight, but The Miz remained determined, finally locking in the maneuver and securing the victory.

Determined to show 2014 Royal Rumble Match winner Batista his abilities, Alberto Del Rio – who also won the Royal Rumble Match, back in 2011) – squared off against former United States Champion Zack Ryder. In his last two consecutive appearances on WWE Main Event, The Mexican Superstar had been successful, and he sought to continue his string of victories. Aggressive in his approach, Del Rio almost immediately took the battle to the outside, where he promptly threw Ryder into the barricade.

Back inside the squared circle, the former World Champion maintained control by applying pressure to his opponent's back and neck. However, Long Island Iced-Z managed to build momentum and nearly defeat Del Rio. Hoping that The Mexican Superstar's rivalry with Batista would be a distraction, Ryder charged forward, nearly annihilating Del Rio with a powerful Broski Boot to the face.

After kicking out of Ryder's pinfall attempt, Del Rio seized an opportunity to regain control. Backing his opponent into a corner, the former World Champion viciously stomped Ryder to the canvas before lining him up and taking him out with a sidekick to the jaw. Securing the pinfall and his third victory in as many weeks, Del Rio certainly sent a message to The Animal.

Intercontinental Champion Big E Langston renewed his rivalry with the Superstar he defeated for the title last November, Curtis Axel. Something of a homecoming for Langston, the former University of Iowa defensive lineman was warmly welcomed by the WWE Universe in Des Moines.

Knowing the size and strength advantage of his opponent, Axel tried to be agile and avoid the Intercontinental Champion. However, what seemed like a sound strategy was brought to a screeching halt as Langston tossed Axel into the air and outside the ring as if he were a rag doll.

The son of WWE Hall of Famer “Mr. Perfect” Curt Hennig attempted to recalibrate, but the Intercontinental Champion's brute strength kept Axel on the defensive. Any time Axel tried to mount an offense, Langston countered, driving his massive knee into the back of his opponent. Even with the crushing strike delivered by Big E, Axel survived and continued to battle the massive Superstar.

Dominating the contest, it appeared as though nothing could stop Langston until, from the outside floor, Axel managed to drive his opponent's back into the ring before tossing him into the steel steps. Battling back and forth inside the ring, neither Superstar could secure a pinfall, though it was clear Langston had already won the support of the WWE Universe. After executing a big splash, the Intercontinental Champion went for his patented Big Ending, but Axel reversed the maneuver and nearly won with his father's Perfect Plex.

Shocked that Big E kicked out, Axel's aggression took center stage as he tried to execute a neckbreaker. With a speed that belies his size and muscle, though, Big E reversed the move and finally picked up the victory – and concluded the evening's action on WWE Main Event – with a Big Ending. 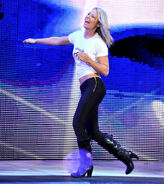 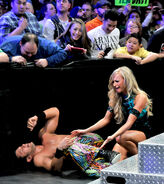