February 11, 2011
The February 4, 2011 Edition of Smackdown is a Professional wrestling television show of the WWE's Smackdown brand, which took place on February 1, 2011 at the Nassau Veterans Memorial Coliseum in Long Island, New York.

Fresh off his surprise appearance in the Royal Rumble Match, Booker T shocked the WWE Universe once again by joining the SmackDown announce team as its newest member. Booker treated fans to a Spinarooni and later revealed that he will be a coach on the upcoming reality series "WWE Tough Enough” hosted by WWE Hall of Famer “Stone Cold” Steve Austin.

After Vickie announced there would be a series of Elimination Chamber Qualifying Matches, the "acting" GM ordered Kelly Kelly to the ring to discuss her attack on Vickie during the World Heavyweight Championship Match at Royal Rumble. As Vickie, Ziggler and Kelly Kelly exchanged heated words about Royal Rumble, Kelly Kelly slapped Ziggler, which led to chaos involving Lay-Cool and Edge.

Representing The Corre, Justin Gabriel & Heath Slater took on WWE Tag Team Champions Santino Marella & Vladimir Kozlov in a non-title match. After a strategic shot to Kozlov's knee, Slater drove the big Russian to the canvas. Gabriel capitalized, finishing off Kozlov with a 450 Splash for a quick win.

In the opening Elimination Chamber Qualifying Match of the night, Drew McIntyre was the first to score a spot by dropping Intercontinental Champion Kofi Kingston with a devastating Future Shock DDT. The opportunity for the Sinister Scotsman came after a momentary distraction from Alberto Del Rio's smiling mug plastered across the arena's TitanTron.

With a dominating offense, it looked like Jack Swagger was well on his way to securing his position in the Elimination Chamber Match. However, The Ultimate Underdog battled back, stinging his larger opponent with a spinning DDT and swift kick to get the pinfall.

To celebrate earning a match at WrestleMania – where he will challenge the World Heavyweight Champion – Alberto Del Rio drove into the arena in a 2010 BMW M6 convertible. To kick the party off, Del Rio invited Hornswoggle to whack a piñata with a wooden stick. But when plans went awry and the Mexican aristocrat ended up on the receiving end of Hornswoggle's swing, Del Rio assaulted him with no remorse. Next, Intercontinental Champion Kofi Kingston came to Hornswoggle's aid, but the champion ended up receiving a brutal beating with the piñata stick and a session in Del Rio's devastating cross armbreaker. The No. 1 contender showed no mercy, requiring WWE officials to free Kingston from his hold.

In a match arranged by his aunt Vickie, Chavo had an opportunity to be in the Elimination Chamber. But in quick order, Kane dispatched of Chavo and his pay-per-view dreams with a brutal chokeslam.

Big Show was up against big odds from the start when The Corre surrounded the ring. When the ref went down due to an inadvertent collision with Wade Barrett, Ezekiel Jackson capitalized and dropped The World's Largest Athlete with a hard-hitting clothesline. Barrett took advantage of his stunned opponent by driving his skull to the canvas with a DDT to get the pinfall. An enraged Big Show tried to unleash his anger on The Corre, but was dropped by a monstrous bodyslam by Ezekiel Jackson.

Before the main event, Vickie declared that if Edge used the Spear, he would be stripped of the World Title. Increasing the challenge that lay ahead, if Kelly Kelly were to lose to Lay-Cool, The Rated-R Superstar would also lose his title.

In a stunning conclusion to the bout, it was Kelly Kelly who secured the victory – and Edge's title – by dropping Layla with a spear. Then in a bitter rebuttal, Vickie fired Kelly Kelly from WWE! Next, after Edge watched his ex-wife berate Kelly Kelly and force her from the arena in tears, Vickie announced Edge would face Ziggler next week for the World Title ... with Vickie as the special guest referee. As The Ultimate Opportunist pondered his newest obstacle, Ziggler viciously attacked from behind with a Zig Zag. 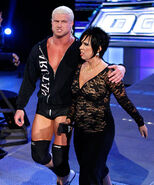 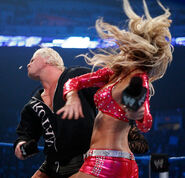 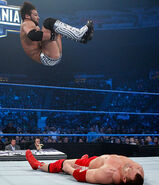 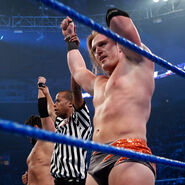 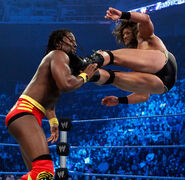 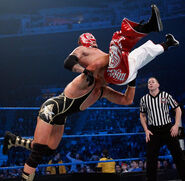 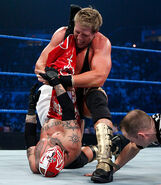 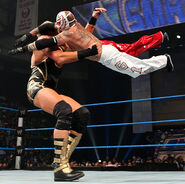 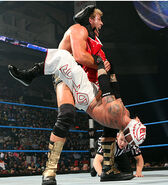 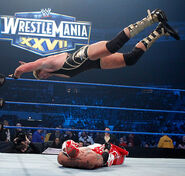 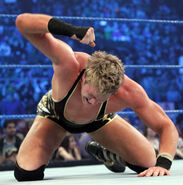 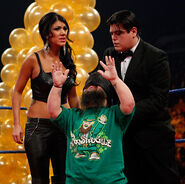 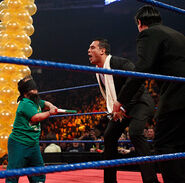 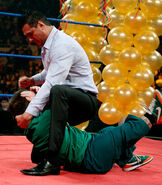 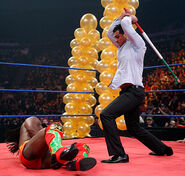 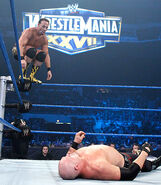 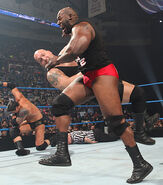 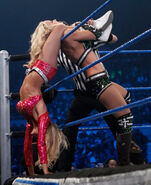 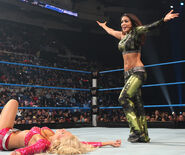 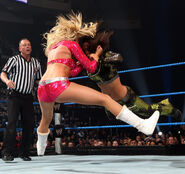 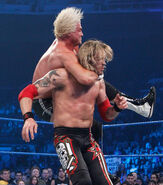 Retrieved from "https://prowrestling.fandom.com/wiki/February_4,_2011_Smackdown_results?oldid=1556209"
Community content is available under CC-BY-SA unless otherwise noted.