Payback was on the minds of NXT Women's Champion Bayley & Carmella as they got ready for this week's main event. The best friends were itching to get their hands on Eva Marie & Nia Jax, who put a damper on their hard-fought title match two weeks ago. Would their desire for retribution be enough to bring them victory?

After falling to the red-hot American Alpha last month, former NXT Tag Team Champions Blake & Murphy were out to prove that their loss was a fluke. Chad Gable toyed with Murphy in the opening moments of the match, taking him down to the canvas easily before handing him off to Jason Jordan. The former champions tried to out-grapple Gable, but the former Olympian was always one step ahead of them and forcing Blake & Murphy to retreat.

Nothing Blake & Murphy did fazed American Alpha, as nearly everything they attempted to do ended up with the mat masters wrenching away at their limbs. The former champions finally took control of the match after a double-team maneuver in which Murphy nearly took off Gable's head off a clothesline. Blake & Murphy tried to wear Gable down, but the crafty Olympian was able to slip out of their grasp and tag in his partner. Jordan tossed Blake & Murphy around the ring with ease before spearing Blake and connecting with Grand Amplitude to earn the victory. American Alpha is on a roll as of late in NXT. Could the NXT Tag Team Championship be in their future?

Competing in NXT means that a Superstar has to be prepared to face absolutely anyone. Apollo Crews learned that this week, when he took on newcomer Christopher Girard. The aggressive Boston native wasted no time going right after Crews, employing a blistering offense that included brutish European uppercuts and a vicious neck crank.

After escaping Girard's clutches, Crews gave his opponent a taste of his own medicine, tackling him to the canvas and raining down with a flurry of fists. Crews survived a late rally from Girard, staggering his opponent with a diving kick and putting him away with his toss powerbomb to pick up a very important win.

Bull Dempsey may have been in a playful mindset as he made his way to the ring, but standing across from him was Tommaso Ciampa, who was in no mood for games. Though the hard-hitting Ciampa went right after Dempsey, the near 300-pound New York Nightmare used his size to his advantage. Ciampa cut Dempsey off before he could gain momentum and went to work on the big man's arm.

The match almost turned around for the Bull-Fit innovator when Ciampa tried to pick him up, only to be crushed under The New York Nightmare. Dempsey attempted to mount a comeback, but Ciampa put a quick stop to it, taking him to the mat and locking on a deep armbar that forced Bull to submit. Ciampa then mocked Bull-Fit after the bell, doing a few jumping jacks to add insult to injury.

The normally exuberant duo of NXT Women's Champion Bayley & Carmella were slightly subdued as they entered the arena for the main event. The beating they suffered at the hands of Eva Marie & Nia Jax two weeks ago was still fresh in their minds as the bell rang and a furious Carmella pounced on the “Total Divas” star. Eva scrambled away and quickly tagged in Nia Jax.

Nia took control of the bout by force, overpowering Bayley and her best friend. Eva and Nia trapped Carmella in the corner and dominated The Princess of Staten Island. Carmella started to turn things around when Nia let her go and charged at her. The fiery Staten Islander evaded her rival, sending Nia through the ropes and to the arena floor, giving Carmella the opportunity to tag in Bayley.

The NXT Women's Champion went right after Eva Marie, capping off a flurry of offense with a Bayley-to-Belly Suplex, only for her pinfall to be broken up by Nia. Carmella almost won the bout after locking Eva in her headscissors submission, but Nia put a stop to that as well. In the end, Nia knocked Bayley off the apron and dragged Eva back to their corner and tagged herself in. The towering competitor crushed Carmella with three leg drops, then let Eva Marie cover The Princess of Staten Island to wrap up the victory. 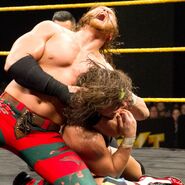 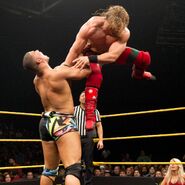 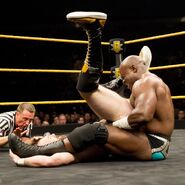 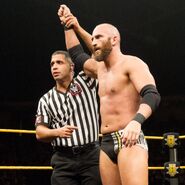 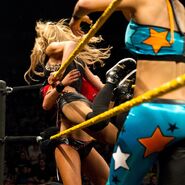 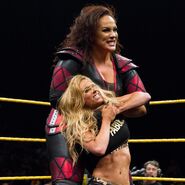