March 2, 2010
The February 23, 2010 Edition of NXT is a Professional wrestling television show of the WWE, which took place at the Bradley Center in Milwaukee, Wisconsin.

The premiere episode of WWE NXT kicked off with quite a clash between United States and Unified Tag Team Champion The Miz and his NXT Rookie, Daniel Bryan. Before sending Bryan to the ring to introduce himself, The Miz warned his NXT Rookie to expect anything, and that if he doesn't show personality, he'd slap some into the “Internet darling.” Then, in front of the WWE Universe, Bryan poked fun at his mentor's reality TV past, and pointed out that he's been honing his skills all over the world for the last 10 years. Naturally, an angry Miz interrupted Bryan, and slapped his mentee, proving not all of the Pros and NXT Rookies will get along during season one of WWE NXT.

Christian introduced the WWE Universe to his NXT Rookie, Heath Slater, a star who is ready to rock the WWE Universe. Slater proved to be a great tag team partner for Captain Charisma, assisting him by pulling Carlito out of the ring, allowing Christian to capitalize and hit Michael Tarver with a Killswitch for the victory. Tarver, who is known as “Mr. 1.9 Seconds” for his ability to quickly knockout his opponent, is being mentored by Carlito, who is sure the knowledge and skills he'll pass on will make Tarver become the next breakout WWE Superstar.

NXT Rookie David “A-List” Otunga brought his A-game to the WWE NXT premiere, picking up his first win in front of the WWE Universe. Under the guidance of his WWE Pro, R-Truth, Harvard Law graduate Otunga defeated Darren Young, who had an ornery CM Punk, Luke Gallows and Serena in his corner. The confident, charismatic and strong Otunga took just minutes to impressively defeat South Beach party boy Young. But the WWE Universe is left to wonder how Young will fare in WWE NXT when his Pro, Punk, is less than excited to mentor the NXT Rookie, that is, unless he's ready to join the Straight Edge Society.

Daniel Bryan was certainly put to the test during his first night in front of the WWE Universe. The NXT Rookie faced the new World Heavyweight Champion, Chris Jericho on the inaugural episode of Syfy's new Tuesday night show. With his NXT Rookie, British bare-knuckle fighter Wade Barrett, in his corner, Jericho was victorious when Bryan tapped out to the Walls of Jericho. But Bryan wowed the WWE Universe with an impressive offensive arsenal of skills and submission moves, almost making Jericho tap out to a Heel Hook. Bryan even fearlessly dove head-first through the ring ropes at his opponent, crashing into the announce table. But it's unlikely Bryan has learned his incredible skills from his Pro, The Miz. In addition to their explosive clash earlier in the night, The Miz attacked Bryan after his main event loss, calling him an embarrassment. But did The Miz beat some respect into his NXT Rookie, or just fuel the intense fire already burning inside Bryan?

Throughout the coming weeks, eight NXT Rookies will try to prove they have the personality, charisma, talent and strength to win a Raw Superstar contract while being mentored by WWE Superstars. But which Pro will successfully pass on his knowledge and skills to the future of WWE? 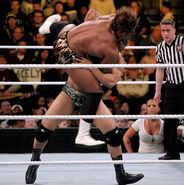 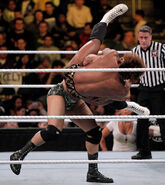 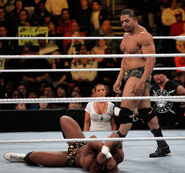