March 1, 2017
The February 22, 2017 Edition of NXT is a Professional wrestling television show of the WWE, which took place at the Full Sail University in Winter Park, Florida on February 1, 2017.

As Asuka's record-setting NXT Women's Championship reign reached its 326th day, three of NXT's top female competitors clashed for the right to challenge The Empress of Tomorrow. Ember Moon and Liv Morgan have become friends and partners over the past few weeks, but that went out the window with a title opportunity hanging in the balance.

Despite Moon and Morgan's best efforts, neither could overcome the advantage that having Billie Kay at ringside gave Royce. The Femme Fatale pulled Royce out of the way of a diving Moon, giving The Venus Fly Trap an opening to grab the fiery Superstar and hurl her into the steel ring steps. Royce neutralized Moon, keeping her out of the fight as she worked over Morgan. When Moon recovered, Kay entered the ring to stop her, but ate an Eclipse for her troubles. The distraction gave Royce the opening she needed to hit Morgan with a Fisherman's Suplex to get the three-count and a championship showdown with Asuka.

Two familiar foes crossed paths this week on NXT, as high-flyer Mark Andrews battled Pete Dunne in a rematch from the semifinals of the WWE United Kingdom Championship Tournament. “The Bruiserweight” tried to ground Andrews in the early moments of the match, wrenching away at the fingers of the Welshman.

Andrews eventually took flight, but went into a tailspin after Dunne caught him with an elbow at ringside, stomped his hand into the steel steps and sent him crashing into the ring apron with an X-Plex. Andrews recovered and stunned “The Bruiserweight” with a reverse hurricanrana and Stundog Millionaire, but could not put Dunne down for good. The Welshman collided with Dunne's knees on an attempted Shooting Star Press. That brought Andrews’ night to a Bitter End, as “The Bruiserweight” connected with his signature move to earn the victory in a thrilling contest.

An impromptu conga line may have broken out upon No Way Jose's arrival this week, but the party came to a screeching halt minutes later, thanks to NXT Champion Bobby Roode. In his first match since capturing the championship in San Antonio last month, The Glorious One was out to set the tone for his reign and send a message to the NXT locker room.

Roode grew frustrated with Jose's dancing and pummeled his foe into the canvas. Jose mounted a comeback and clobbered the NXT Champion with a big right hand that sent Roode to the arena floor. However, after Jose tossed him back into the ring, Roode pounced on his rival and hit the Glorious DDT to win the match.

The NXT Champion did not stop his attack once the bell rang, though. Roode returned to the ring and locked Jose in the single leg crab that put Shinsuke Nakamura on the shelf. His assault was stopped when Kassius Ohno made his long-awaited return to NXT. Ohno declared that he was coming for the NXT Championship, only for Roode to surprisingly declare that they could square off for it right now. The NXT Champion then attacked Ohno from behind, going after his knee. But it isn't Ohno's knee that Roode should have been worried about, but his elbow, as the returning Superstar rocked Roode with a series of strikes before sending the champion retreating after a big clothesline.

As his NXT Championship reign is in its infant stages, Bobby Roode is quickly learning that making NXT glorious may be a taller task than he anticipated. 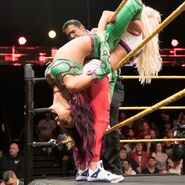 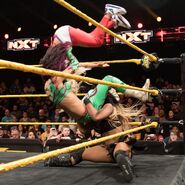 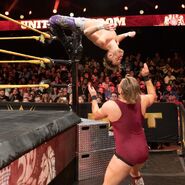 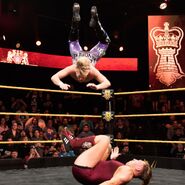 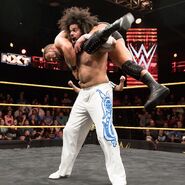