February 28, 2018
The February 21, 2018 Edition of NXT is a Professional wrestling television show of the WWE, which took place at the Center Stage Theater in Atlanta, Georgia on February 1, 2018.

Velveteen Dream picked up right where he left off after defeating Kassius Ohno at TakeOver: Philadelphia, riding his unbreakable confidence and Purple Rainmaker elbow drop to an impressive victory over No Way Jose.

Basking in his victory, Dream took the microphone to take issue with several NXT Year-End Award-winners like Aleister Black, Asuka and Tyler Bate. Needless to say, The Velveteen Dream Experience once again delivered.

The tournament honoring the memory of WWE Hall of Famer Dusty Rhodes will begin in two weeks on the March 7 episode of NXT, and the winning tandem will challenge Undisputed ERA's Bobby Fish & Kyle O’Reilly for the NXT Tag Team Championship at TakeOver: New Orleans.

With NXT's Tag Team division as crowded as it's ever been, the competition to be a part of this epic tournament is sure to heat up. Who will join teams such as The Authors of Pain, Heavy Machinery, Street Profits and TM61 in this epic tag team tournament?

Vanessa Borne showed off a new edgier side to her persona, but Nikki Cross welcomed the pain en route to a commanding victory.

Cross wasted no time going on the offensive, but Borne slowed her unhinged opponent via a body scissors. Borne then attempted to get inside her opponent's head by licking her neck.

The move backfired, however, as the crazed Cross battled out of the submission before hitting The Purge for the win.

Johnny Gargano's NXT career is over.

Just as he's done every single time he's stepped inside an NXT ring, Johnny Wrestling put up a spirited and courageous battle. However, Gargano once again ended up on the losing side against NXT Champion Andrade “Cien” Almas, resulting in arguably NXT's most popular Superstar having to leave the black-and-yellow brand for good.

The challenger was riding an early wave of momentum, but the champion's business manager Zelina Vega slowed Gargano's high-energy attack when she stepped in front of a potential head-first dive onto Almas outside the ring. Instead, Candice LeRae – who was at ringside – got in the ring and launched herself head-first onto Vega. The NXT Universe at Center Stage Theatre roared as LeRae chased Vega from the ringside area behind a flurry of punches.

Gargano and Almas proceeded to wage war in a grueling high-velocity clash, just like they have in their previous three battles. The turning point came when Almas missed Gargano with a strike, instead delivering the blow to the referee.

With the official knocked out, Gargano locked in the Gargano Escape, only to have Tommaso Ciampa come out of nowhere to level Gargano with his crutch. The NXT Champion proceeded to deliver his Hammerlock DDT for the victory, retaining his title and ending Johnny Wrestling's NXT career.

LeRae came back down to the ring for an emotional embrace with her husband as NXT fans chanted “Thank you, Johnny!”

As Gargano walked off the NXT stage for the final time, Ciampa stood menacingly, waving goodbye from across the Center Stage Theatre as NXT went off the air. 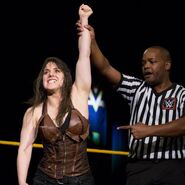 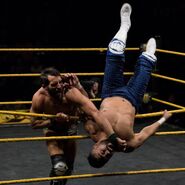