February 22, 2017
The February 15, 2017 Edition of NXT is a Professional wrestling television show of the WWE, which took place at the Full Sail University in Winter Park, Florida on February 1, 2017.

Akam & Rezar obliterated their opponents in quick and very painful fashion, picking up the win after hitting The Last Chapter. Following the contest, the menacing titleholders hit their devastating Super Collider maneuver on the fallen Superstars, sending a very clear message of pain to The Revival who blindsided them last week.

Last week, after Liv Morgan defeated Billie Kay in singles action, Kay and Peyton Royce demanded a match against the New Jersey native. General Manager William Regal obliged, but in a tag team match against a partner of Morgan's choosing.

Despite Kay and Royce laughing off the thought of their rival having any friends, Morgan arrived with Ember Moon by her side, providing plenty of competition for the devious Aussies. However, Kay and Royce managed to single out Morgan long enough to take out the energetic Superstar and keep her down for the three-count.

Following the contest, Regal announced that next week, Morgan, Royce and Moon will battle in a Triple Threat Match to determine NXT Women's Champion Asuka's new No. 1 contender.

For the first time since losing the NXT Tag Team Championship to The Authors of Pain at TakeOver: San Antonio, #DIY addressed the NXT Universe at Full Sail University. Johnny Gargano & Tommaso Ciampa made it clear that they want their guaranteed rematch against Akam & Rezar, which prompted the monstrous duo and their manager Paul Ellering to arrive.

The ominous Ellering told Gargano & Ciampa that they will get their rematch in two weeks. Of course, the former titleholders weren't pleased with this, but before the conversation could continue, The Revival attacked Gargano & Ciampa from behind. The rapid sneak attack prompted the champions to storm the ring in anger as they, too, felt the wrath of Scott Dawson & Dash Wilder's cowardly ways last week. However, The Revival was once again able to escape Akam & Rezar's wrath.

For the first time, WWE United Kingdom Champion Tyler Bate defended his title. The noteworthy event was also significant in that it went down against his tag team partner and friend, Trent Seven. The early goings of this championship contest proved to be rather unusual as both Superstars took turns twirling each other's mustaches and playfully testing their strength.

The showdown didn't stay playful for long, though, as Bate's uppercuts seemed to spark a fire within Seven. The match quickly went from friendly to vicious as both competitors gave the crowd a close-up look at “British Strong Style.”

Amid the heated clash, Seven nailed his Seven Stars Lariat, coming within a second of becoming the new WWE United Kingdom Champion. Bate, however, showed the will of a champion, withstanding Seven's onslaught to hit his Tyler Driver ’97 for the victory. 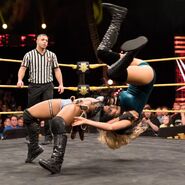 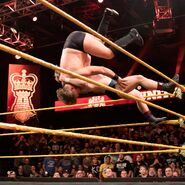 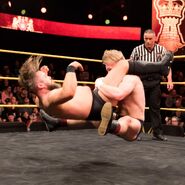