Another week, another challenge by Dean Ambrose to Brock Lesnar. Getting slapped around by The Beast Incarnate twice apparently wasn't enough for The Lunatic Fringe, who opened Raw by daring Lesnar to hit him with another F-5. What Ambrose got may well have been worse when Stephanie McMahon answered his call instead and gave him an F-5 of a different flavor when she forced Ambrose to defend his Intercontinental Title in a Fatal Five-Way against Dolph Ziggler, Stardust, Tyler Breeze and Kevin Owens. Oh, and as a final handicap to Ambrose, Roman Reigns was barred from ringside, and his interference would not only disqualify Ambrose, but remove him from their WWE Fastlane Triple Threat Match altogether.

After two months of empty hands, The Prizefighter has himself a championship once again: Kevin Owens battled his way past Dean Ambrose, Dolph Ziggler, Stardust and Tyler Breeze to earn his second Intercontinental Championship. The win was a big dose of validation for the embattled KO following two straight losses to The Showoff, though it's unlikely anyone will attribute this to Owens’ fisticuffs alone.

After a seesaw bout where Breeze came a hair's breadth from the title by hitting Owens with the Beauty Shot, Ziggler sprang with the Zig Zag when Ambrose had Stardust in position for Dirty Deeds, taking both Superstars out. Breeze attempted to capitalize by tossing The Showoff, but KO got there first, plunging Prince Pretty to the mat with the Pop-up Powerbomb to win. Honorable? No. But it certainly was gorgeous.

The New Day have made their distaste of Attitude Era veterans vocal, so six days before guest-starring on Edge & Christian's “Cutting Edge Peep Show,” they sent resident powerhouse Big E against Mark Henry to punish The World's Strongest Man for abandoning them during last week's Tables Match. The former World Heavyweight Champion gave Big E an appropriately big fight, even with Kofi Kingston and Xavier Woods running interference. But a trip to the turnbuckle that brutalized Henry's ribs proved to be the difference. Even though Henry evaded the Big Ending, he was so spent that the reversal sapped him of his strength and all the WWE Tag Team Champion had to do was cover him for the pin.

Daniel Bryan has retired and Nikki Bella is injured, so it's on Brie Bella to not only win the Divas Title at WWE Fastlane, but also carry her family name between the ropes when she steps into the ring with Charlotte. Unfortunately, Brie only got about two sentences into her interview with Byron Saxton before Charlotte and Ric Flair crashed the party in an attempt to goad Brie into forfeiting her title opportunity at Fastlane and transition into being a full-time nurse for Bryan and Nikki. When Brie declined, Charlotte responded with insults and Brie Mode activated by way of a flurry of “Yes!” kicks to the sternum that Flair had to physically haul Charlotte away from.

As you'd expect from any new guy in town, AJ Styles has caught the attention of a pair of veterans looking to cut him down to size. And after trading wins with Chris Jericho, The Phenomenal One once again managed to upend The Miz, who's taken a particular interest in demeaning the “redneck rookie” in recent weeks. Despite a pre-bell ambush by Miz, Styles made The Awesome One eat his words (if not his teeth this time) in what quickly turned into a contest of who could knock whose molars out first.

With Y2J watching on commentary, Styles kicked out of a Skull-Crushing Finale and locked in the Calf Crusher before challenging Jericho to a rubber match at Fastlane. So what's the answer? Looks like Styles will have to wait until SmackDown to find out.

She's baaaack. No, not Paige, who made her Raw return after an absence of several weeks, but Summer Rae, coming off an even longer break from in-ring action by knocking off The Diva of Tomorrow in a house-on-fire upset that few in the WWE Universe seemed to see coming. To her credit, Paige had an answer to almost every one of Summer's impressive offensive maneuvers (DDT to the mat? Meet knees to the face), but she waited about a second too long to lock in the PTO, so Summer rolled her up and defeated her. If this is, indeed, Paige's house, she's got herself an intruder.

With all this focus on Dean Ambrose's growing vendetta against Brock Lesnar in the Fastlane Triple Threat Match, the WWE Universe can be forgiven for thinking Paul Heyman had decided to sit this one out. Well, forget no more. In fact, rather than hype the match outright, Heyman beckoned The Big Dog for a face-off and attempted to worm his way into the former WWE World Heavyweight Champion's head by predicting either the end of his dream or his friendship at Fastlane.

Reigns held fast, but once Heyman departed, The Dudley Boyz hit the ring for an unprovoked sneak attack on Reigns. It took the arrival of Ambrose to save Reigns, though it wasn't so cut and dry as that. The Lunatic Fringe nearly planted Reigns with Dirty Deeds after the Dudleys retreated as a statement of how far he's willing to go at Fastlane. A shocked Reigns took it in stride, but there's no denying that Heyman may have had a point.

Are The Social Outcasts the new Internet Champions? It certainly seems that way, what with Heath Slater knocking off the original trending icon, Zack Ryder, on Raw. It's not that The Ultimate Broski was interested in ceding his social media throne to these upstarts. In fact, the former U.S. Champion had Slater dead to rights until Bo Dallas clambered onto the apron and distracted him. Slater was quick to capitalize with an impaler DDT, which was enough to put Ryder down for three.

There's no denying The League of Nations spoiled Sin Cara's return last week on Raw, but when faced with three of the foreign menaces for a second consecutive week, The Lucha Dragons learned from their mistakes and recruited Neville to round out their numbers. Unfortunately, the song remained the same as last week, though. The League collectively demoralize Kalisto before his U.S. Title Match against Alberto Del Rio on the Fastlane Kickoff instead of taking all their enemies out. Sin Cara ended up taking the loss, courtesy of The Pride of Mexico's top-rope stomp ... to the bad shoulder ... while strung up in the ropes ... halfway across the ring.

Take notice, Divas division: Becky Lynch does not take kindly to cheap shots. Maiden Ireland took a sneak-attack kick to the face from Naomi in the parking lot before Raw and she wasted no time in paying Naomi back, Lass-plexing her out of the ring within moments of the opening bell in their Raw match. Naomi countered impressively with a flurry of kicks to the face, but a Dis-arm-her put her away shortly thereafter. Tamina didn't hesitate to make Becky pay with a post-match beatdown, though Sasha Banks’ arrival forced the former Team B.A.D. members to make a hasty exit.

The Wyatt Family wants to go after the “titans” of WWE. Let's see what those titans have to say about it. Luke Harper, Erick Rowan and Wyatt himself didn't wait to see the results of Braun Strowman's battle with Big Show to make their presence felt, swarming the giant the second he got a leg up on The New Face of Destruction. Fellow Wyatt victim Ryback sprinted to the ring for some payback of his own, but even that wasn't enough to stymie the first family of fear ... until Kane rose from beneath the ring to finally give the big men an edge against their tormentors, so all that was left for the Wyatts to do was follow their own advice: Run. 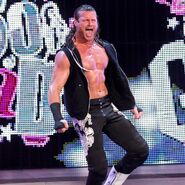 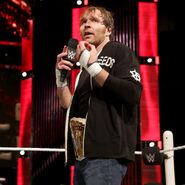 Retrieved from "https://prowrestling.fandom.com/wiki/February_15,_2016_Monday_Night_RAW_results?oldid=1628722"
Community content is available under CC-BY-SA unless otherwise noted.