Raw's anonymous General Manager was at it again. The GM arranged a series of matches involving the six Superstars who will compete in the Raw Elimination Chamber Match. The GM stipulated that if any member of The New Nexus interfered, CM Punk would be eliminated from Sunday's bout. Also, if any of the Elimination Chamber participants themselves were to interfere, they would be barred from competing inside Satan's Structure as well, costing them a possible opportunity at a WWE Title Match at WrestleMania XXVII.

In the first match, John Cena and CM Punk battled to a dirty and controversial finish. For WWE's 2010 Superstar of the Year, his demise arrived when Punk tossed a steel chair into the ring to distract the ref. The preachy Superstar then clocked Cena with a wrench before putting him away with a GTS.

Mark your calendars. This Friday night on SmackDown promises to be interesting indeed. As Alberto Del Rio bragged about his chances in the World Heavyweight Title Match at WrestleMania, Edge confronted him and pummeled the Mexican aristocrat with a series of blows. Then it was Vickie Guerrero’s turn.

SmackDown’s “acting” General Manager informed The Rated-R Superstar that there would be an official World Heavyweight Championship coronation of her boyfriend, Dolph Ziggler, on Friday's show. She also revealed that she has evidence of Edge assaulting former GM Theodore Long, and that her revelation will cost her ex-husband his job!

During the Divas Title Lumberjill Match, current champion Eve managed to chop down her opponent, Natalya. While Eve retained her title, she wasn't the only Diva cutting down the competition. Gail Kim leveled Nikki Bella, who, along with her sister Brie, had scuffled with her, Eve and Natalya in the locker room area.

Elimination Chamber mates, you've been warned. Prior to his match with Sheamus, Mark Henry was attacked by the Irishman on the entrance ramp. The Celtic Warrior nailed The World's Strongest Man with a Boot Kick before advising his competition in the Elimination Chamber Match that he's capable of anything. He then booted Henry again to put an exclamation on the point.

It was evident that Daniel Bryan wasn't all there. During his battle against WWE Champion The Miz, the United States Champion appeared unfocused, perhaps more concerned with his girlfriend Gail Kim, who had been in a scuffle with The Bellas earlier. As a result, The Cleveland Screamer triumphed in the pair's non-title match just six days before he defends his title against Jerry “The King” Lawler at WWE Elimination Chamber.

Enemies became allies when the Raw GM changed the singles match between Elimination Chamber combatants John Morrison and R-Truth. Instead, the Superstars were paired together in a tag team match against David Otunga & Michael McGillicutty. Former tag team partners, Morrison and Truth handled the challenge – and underhanded tricks – with efficiency and went on to defeat The New Nexus disciples.

Ariel Winter, costar of the new movie The Chaperone, starring Triple H, helped The Punjabi Giant host The Khali Kiss-Cam. It was a Valentine's Day delight that left Winter the object of Hornswoggle’s affection. The little guy even got a smooch on the cheek as a result. Luck of the Irish!

The Viper was forced to slither past more than just Sheamus after his bout ended. Once Randy Orton finally overcame the formidable presence of The Celtic Warrior in their singles bout, he was confronted by all combatants in this Sunday’s Elimination Chamber Match. Orton and Sheamus were joined in the melee by John Morrison, R-Truth, John Cena as well as CM Punk and The New Nexus.

The commotion left a slew of Superstars licking their wounds. It also left Cena and Orton standing tall amid the chaos.

Can you smell what Dwayne “The Rock” Johnson is cookin'? You will when WrestleMania XXVII kicks off live from Atlanta on April 3. The former WWE Superstar thrilled everyone when he was announced as host of WWE's biggest event of the year and emerged for an explosive and emotional appearance! 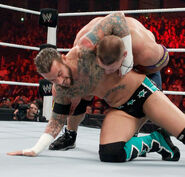 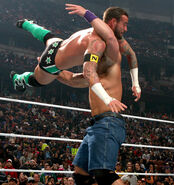 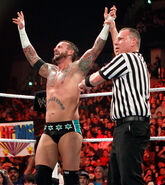 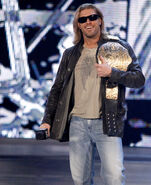 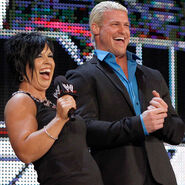 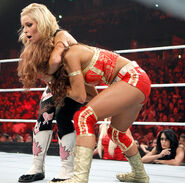 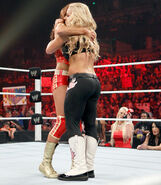 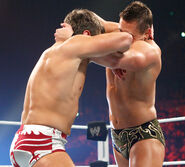 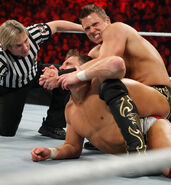 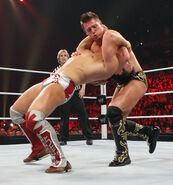 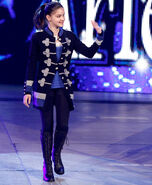 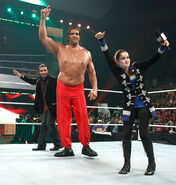 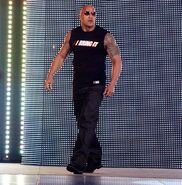 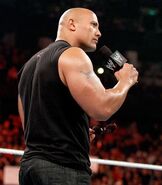 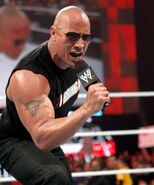 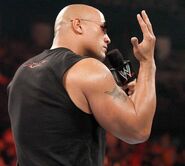 Retrieved from "https://prowrestling.fandom.com/wiki/February_14,_2011_Monday_Night_RAW_results?oldid=1556101"
Community content is available under CC-BY-SA unless otherwise noted.