February 20
The February 13, 2019 NXT UK results was a Professional wrestling television show of the WWE's NXT UK brand. It took place on January 25 & 26, 2019 at the Phoenix Convention Center in Phoenix, Arizona. It aired on the WWE Network on February 13, 2019.

NXT UK Women's Champion Toni Storm kicked off the latest episode of NXT UK by taking issue with Rhea Ripley for her recent controversial tactics. Describing her adversary as a “bully,” the fighting titleholder made it clear that she will gladly take The Mosh Pit Kidd down again.

Ripley soon interrupted to insist that Storm's victory over her at NXT UK TakeOver: Blackpool was nothing more than “luck” before expounding on how she is sick and tired of people comparing her to the current titleholder instead of the other way around.

No longer interested in merely trading words, Storm laid into her foe and lit the fuse on a brawl until Ripley decided to back away and save her aggression for their rematch.

Noam Dar returned to NXT UK to engage Jordan Devlin in an explosive showdown, and Devlin gained the advantage when The Scottish Supernova hurt his ankle by inadvertently kicking the steel steps.

Smelling blood in the water, The Irish Ace looked to stomp his opponent's injured appendage into the unforgiving steel, but Travis Banks emerged to make sure Dar didn't suffer the same fate that he had.

Back in the ring, when Devlin illegally attempted to use the ropes to pick up the pinfall, The Kiwi Buzzsaw again interceded to prevent the three-count. Though the Irish Superstar knocked him of the apron in response, the disruption was enough for Dar to pick up the quick pin.

When an irate Devlin attacked his opponent from behind in the aftermath, Banks reengaged his adversary and quickly ignited a fierce post-match brawl between the two bitter adversaries.

Just moments after the announcement that NXT UK Women's Champion Toni Storm will battle Rhea Ripley in a title rematch on the Feb. 20 edition of NXT UK, dangerous contender Jinny went to war on the “inner swag” of NXT's explosive Mia Yim.

Although the “HBIC” drove The Fashionista into the turnbuckle with a wicked German suplex in the final moments, Jinny escaped from the ring before her opponent could follow up. Jinny then caught Yim with a solid kick as her prey was pursuing her back into the squared circle and used the ropes to help assure her the three-count.

As Gallus look regroup and refocus on conquering “their kingdom,” Wolfgang set out to do what his stablemate Joe Coffey could not, namely defeat reigning WWE UK Champion Pete Dunne in NXT UK's main event non-title showdown.

In the intense contest that followed, The Last King of Scotland battled through injuries to his arm and left knee to take The BruiserWeight to the limit. Wolfgang's onslaught saw him drop the tough titleholder off his shoulders and into the impactful double knee at a critical moment. When he attempted the Howling off the top rope, however, the resilient Dunne caught him in mid-air in the armbar, snapped his fingers and made Wolfgang tap out for another tremendous victory. 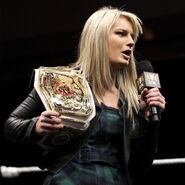 Retrieved from "https://prowrestling.fandom.com/wiki/February_13,_2019_NXT_UK_results?oldid=1556099"
Community content is available under CC-BY-SA unless otherwise noted.