The February 10, 2011 Edition of Superstars is a Professional wrestling television show of the WWE, it was taped at the Resch Center in Green Bay, Wisconsin on February 8, 2011.

Natalya’s comeback began tonight. After a disappointing few weeks in which she was embarrassed by Team Lay-Cool and lost her coveted Divas Championship, the Hart Dungeon-trained beauty started her rebuilding process with an impressive victory over Alicia Fox. Always a cruel competitor, the vicious Fox was not easy for Natalya to handle. But the determined Diva would not be denied and finally locked in a Sharpshooter for a big win.

This unique showdown was billed as a Handicap Match, but The Usos looked like the ones at a disadvantage when faced with the massive Great Khali. After losing to The Punjabi Playboy in a dance-off on Raw two weeks ago, the young tag team was hoping to knock the big man down with a double-team attack. But the former World Heavyweight Champion’s size and power were simply too much from Jimmy and Jey to handle.

Talk about adding insult to injury. On last Thursday’s “WWE Superstars,” the unpredictable Tyler Reks destroyed Curt Hawkins after the two men won a tag team match together. Embarrassed and angered by the attack, Hawkins was out for revenge tonight, but taking out “The Dreadlocked Demolition Man” is much easier said than done. Using his size and strength advantage, Reks was able to control the majority of the match and eventually put his opponent away with the Burning Hammer.

Trent Barreta can't seem to get a win streak going. Suffering a series of losses in recent weeks on “WWE Superstars,” the talented youngster's woes continued tonight as he found himself outmatched by the cocky Jack Swagger. A former World Heavyweight Champion, “The All-American American” had a distinct advantage over his opponent in experience, size and confidence. This was clear as Swagger threw Barreta around the ring before finishing him off with a wrenching ankle lock submission. Better luck next week, Trent. 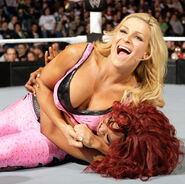 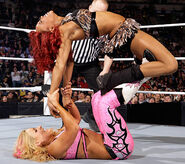 Retrieved from "https://prowrestling.fandom.com/wiki/February_10,_2011_Superstars_results?oldid=1556044"
Community content is available under CC-BY-SA unless otherwise noted.