February 8, 2017
The February 1, 2017 Edition of NXT is a Professional wrestling television show of the WWE, which took place at the Freeman Coliseum in San Antonio, Texas on January 28, 2017, before NXT TakeOver: San Antonio went live on the WWE Network.

With NXT Women's Champion Asuka successfully defending her title in a Fatal 4-Way Match at TakeOver: San Antonio, is it now Ember Moon's time to step up and challenge for the coveted championship?

The rising young Superstar has made it known that she has her sights set on The Empress of Tomorrow's title and she took another step toward proving she is worthy of a championship opportunity by defeateding Aliyah in a hard-hitting showdown in The Lone Star State.

To her credit, Aliyah did not go down without a fight, delivering some vicious strikes against Moon. In the end, however, Moon reigned supreme after hitting the Eclipse, her spectacular corkscrew stunner from the top rope.

WWE United Kingdom Champion Tyler Bate made his NXT debut and was greeted by one of NXT's hardest-hitting Superstars, Oney Lorcan.

The Boston native didn't hold back in unleashing his trademark striking offense, pummeling the 19-year-old Brit with emphatic blows. The Dudley, England, native —who outlasted 15 of the United Kingdom's top Superstars to become the first-ever WWE United Kingdom Champion — showcased remarkable resilience though, storming back behind his crowd-pleasing airplane spin. After a spirited comeback, Bate would eventually nail the Tyler Driver ’97 on Lorcan to pick up an impressive debut victory.

After their confrontation last week, No Way Jose and Elias Samson looked to settle their differences in front of a rowdy NXT Universe in San Antonio. The two foes fought inside and outside the ring, taking turns unleashing a barrage of high-impact maneuvers.

Despite The Drifter’s impressive offensive arsenal, it was Jose who walked out the victor after catching his opponent with a mid-air forearm to the jaw. 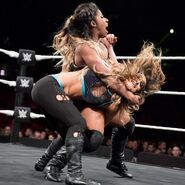 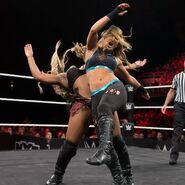 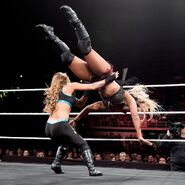 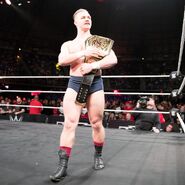 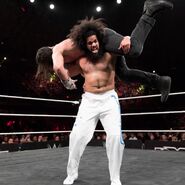