The ECW World Television Championship was the secondary title in Extreme Championship Wrestling from 1992 until it folded in 2001. It was originally called the ECW television championship. The title was almost on level with the ECW World Title when Rob Van Dam held it due to the calibre of matches he had. He had a 23-month reign as champion that only ended due to an injury. His title reign had propelled him into the World Title picture when the injury occurred. 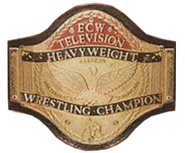 Retrieved from "https://prowrestling.fandom.com/wiki/ECW_World_Television_Championship?oldid=1542384"
Community content is available under CC-BY-SA unless otherwise noted.