Destination X is an annual professional wrestling pay-per-view (PPV) event held by Total Nonstop Action Wrestling in the month of March. Despite what the name and promotional posters seem to imply, the show is not focused around the X Division any more so than any other pay-per-view, although the 2005, 2006, 2009 and 2010 events had Ultimate X matches. It was announced on TNA Wrestling's official website in January 2011 that Destination X was moving from March to July, switching places with TNA's traditional July PPV, Victory Road. From 2005 to 2012, it was held as a pay-per-view event as well. After a one-year hiatus, the Destination X returned in 2013 as an Impact Wrestling special episode. 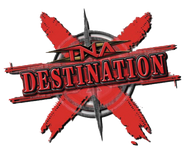 Retrieved from "https://prowrestling.fandom.com/wiki/Destination_X?oldid=1584168"
Community content is available under CC-BY-SA unless otherwise noted.