December 14, 2016
The December 7, 2016 Edition of NXT is a Professional wrestling television show of the WWE, which took place at the Full Sail University in Winter Park, Florida on November 30, 2016.

New NXT Tag Team Champions #DIY received a hero's welcome as they made their first appearance at Full Sail University since their epic win over The Revival at TakeOver: Toronto. Unfortunately, before Johnny Gargano & Tommaso Ciampa could even say a word, The Authors of Pain and WWE Hall of Famer Paul Ellering arrived.

The legendary manager quickly touted his team's success as the winners of the 2016 Dusty Rhodes Tag Team Classic, before previous NXT Tag Champions Scott Dawson & Dash Wilder interrupted. The self-proclaimed “top guys” wisely walked safely around Akam & Rezar as they proclaimed to be the rightful No. 1 contenders to the coveted tag team titles. The Revival's assertion that The Authors of Pain only won the Dusty Classic because of them prompted Ellering's monsters to shove Dawson & Wilder to the floor before declaring their next chapter to be written with them as the NXT Tag Team Champions.

No Way Jose & Rich Swann were looking for redemption against SAnitY, after both Superstars suffered brutal beatdowns at the hands of the anarchy-loving faction in recent weeks. Something was amiss with SAnitY from the beginning, as Sawyer Fulton was notably absent. Before the contest began, Eric Young took what looked to be Fulton's jacket and spit on it before throwing it out of the ring.

With Nikki Cross lurking at ringside, Jose & Swann still found themselves at a disadvantage, but this didn't stop the electrifying duo from delivering an energetic attack against Young and Alexander Wolfe. This heated battle would be interrupted, though, as the gigantic Damo appeared in the crowd, taking out Jose on the outside before Young finished his work back inside the ring to pick up the win for SAnitY.

Damo's menacing presence seemed to surprise and confuse SAnitY as much as the NXT Universe. The monstrous competitor stared down the chaos-inducing group before walking up the ramp, picking up Fulton's jacket and throwing it back down.

While Young & Wolfe rushed to the locker room to regroup after Damo's surprising emergence, Nikki Cross hung back. The maniacal Scot took a few moments to gaze at the unattended NXT Women's Champion, only to cross paths with the Superstar who holds that title, the undefeated Asuka.

Kimber Lee did her best to slow down Ember Moon, but there was no stopping the red-hot Moon, who unleashed her highlight-reel assault against Lee. In the end, Moon climbed to the top rope to hit her trademark corkscrew stunner for the impressive victory.

Saturday night, during an NXT Live Event in Osaka, Samoa Joe defended his newly won NXT Championship against Shinsuke Nakamura. The rematch from TakeOver: Toronto, which saw Joe win the coveted title from The King of Strong Style in an epic main event, aired Wednesday night on NXT.

The NXT Universe witnessed the crowning of a new champion as Nakamura became only the second two-time NXT Champion, with Joe being the other to achieve the elusive feat.

The contest began with the familiar rivals feeling each other out in an attempt to gain an early advantage. The powerful Joe would ultimately use his size and strength advantage to wear down his Japanese challenger. Nakamura continually battled back only to have Joe overpower him with another devastating maneuver. The brutal bout moved to the outside with Joe looking to use the steel steps on his opponent, but it was The Samoan Submission Specialist who was sent head-first into the unforgiving object. This proved to be the momentum shift Nakamura needed as he proceeded to take down the hulking titleholder until he hit his Kinshasa finisher for the victory.

After the contest, Nakamura was greeted backstage by General Manager William Regal, who congratulated the new champion on a hard-fought victory. However, Regal also informed the weary titleholder that Joe requested a rematch on Dec. 8 when NXT Live comes to Melbourne, Australia. Oh, and that NXT Championship Match will be inside a steel cage! 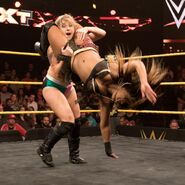 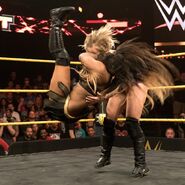 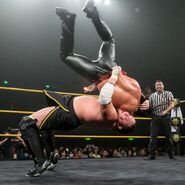