Looking to assure that both Big Show and Sheamus arrived to their World Title Chairs Match at WWE TLC in one piece, SmackDown General Manager Booker T demanded that both Superstars sign a No Contact Clause Contract.

The agreement would stipulate that neither one could lay a hand on the other until their pay-per-view showdown in nine days. The head of SmackDown did not mince words on the subject, making it clear that if Sheamus refused to sign, he would lose his title match and if Show didn't sign, he would lose the World Title outright.

Sheamus signed first, acknowledging that having to wait to take down his giant adversary was like waiting for Christmas. The World's Largest Athlete responded that Sheamus’ gift would be not getting hurt for nine days. But he also warned The Celtic Warrior should be careful what he wished for.

The resilient Daniel Bryan showed a great deal of both skill and bravery against the fierce Big Show, as The World's Largest Athlete punished his opponent in a battle that stretched both inside and outside the ring.

Nevertheless, the intestinal fortitude of the submission specialist would roar back and, to the amazement of the WWE Universe, Bryan eventually took Big Show off his feet.

But as Bryan looked to follow-up with an assault off the top rope, The Shield suddenly appeared in the crowd — nine days before they will face Team Hell No and Ryback in a Tables, Ladders & Chairs Match at WWE TLC. As Bryan took notice of the emerging faction, Big Show seized the opportunity, executing an earth-shattering chokeslam on Bryan from his high perch for the three-count.

When The Shield attacked Bryan after the contest, the fallen Superstar's partner, Kane, rushed to the ring to engage them. In spite of the ruthless aggression of The Big Red Monster, though, the numbers disadvantage proved to be too much. The Shield took down him down, executing a huge three-man Powerbomb on The Devil's Favorite Demon to send a clear message they were ready for WWE TLC.

Once again, Damien Sandow called a member of the WWE Universe into the ring, asking his potential apprentice three questions to determine if he was worthy of being his protégé. While the fan answered the first two questions with ease, the extremely difficult third question left him completely stumped — opening him up to ridicule and to his immediate dismissal from the ring by “The Intellectual Savior of the Masses.”

But before Sandow could make his own exit, the outspoken Miz emerged to ask his own question of “The Enlightened One” — one specifically designed to mock Sandow like only The Awesome One could.

With Drew McIntyre back in action for the first time in months — after recovering from a serious wrist injury — 3MB took on Brodus Clay & The Usos.

Just when it looked as if the air-guitar-playing trio was about to get beat, Heath Slater and Jinder Mahal attacked The Funkasaurus on the apron, igniting a furious battles outside the ring between the four non-legal Superstars. This opened the door for McIntyre to gain the advantage and overcome Jimmy Uso with the Future Shock DDT.

Already set to face Intercontinental Champion Kofi Kingston for the championship gold at WWE TLC in nine days, Wade Barrett prepared to take on the unrelenting Randy Orton — with “The Wildcat” joining the SmackDown announce team.

Whether the English Superstar would be able to keep his full attention on WWE's Apex Predator with Kofi in the wings remained to be seen.

In the explosive bout that followed — pitting two of the most brutal brawlers in the squared circle against each other — The Viper eventually went for the RKO. But Barrett had enough presence of mind to hold onto the ropes at the last second, sending Orton crashing to the canvas without his prey in tow.

The tough-as-nails Barrett then turned his attention to the turnbuckle, looking as if he would remove it and expose his adversary to a much harder surface. But before he could, though, Kofi leaped up onto the ring apron to protest his action. This opened the door for a recovered Orton to hit the successful RKO for the huge win.

In an explosive tag team match, the action proved just as interesting outside the ring as inside it. After the mischievous Hornswoggle caused Rosa Mendes to fall backward in playful fashion at ringside, Natalya stopped the angry Diva's pursuit with a fierce clothesline.

As the Divas battled outside the ring, The Great Khali was taking care of business against the cousins from San Juan, Puerto Rico. The Punjabi Playboy then tagged in ’Swoggle, who hit the Tadpole Splash on Epico for the victory.

Just nine days before he will challenge the Swiss Superstar for the United States Championship at WWE TLC, the charismatic R-Truth interrupted Cesaro in defense of America.

Longtime adversaries Sheamus and Alberto Del Rio engaged in a monumental SmackDown main event, with Big Show observing the action from the ramp. And after a brutal back-and-forth struggle, The Celtic Warrior ultimately reigned supreme, making Del Rio tap out to the Clover Leaf.

As the dust cleared, Big Show stepped into the ring, knowing if Sheamus laid a hand on him before their Chair Match at WWE TLC, he would lose his World Heavyweight Championship Match.

Banking that the “Irish temper” on The Celtic Warrior would prevail over reason, the giant closed his eyes, tempting Sheamus to strike.

Rather than give in, however, the former World Champion did the next best thing — grabbing a close by Ricardo Rodriguez and hurling Del Rio's persona ring announcer into The World Largest Athlete. Since the below-the-belt onslaught didn't involve him hitting Big Show, Sheamus didn't break the rules.

Add a photo to this gallery
. 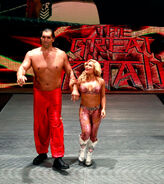 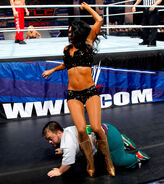 Retrieved from "https://prowrestling.fandom.com/wiki/December_7,_2012_Smackdown_results?oldid=1554878"
Community content is available under CC-BY-SA unless otherwise noted.