The December 6, 2004 Edition of RAW is a Professional wrestling television show of the WWE's RAW brand, which took place on December 6, 2004 at the Cricket Arena in Charlotte, North Carolina.

Chris Benoit and Edge both claimed to be the rightful World Heavyweight Champion on Monday Night RAW, but WWE Chairman Mr. McMahon had different plans. Mr. McMahon studied the footage from the previous week's Triple Threat Match. Concluding that the match ended in a tie, Mr. McMahon did what he considered the only reasonable course of action: vacate the Championship.

And by clarifying the situation, Mr. McMahon added another layer of mystery to the World Heavyweight Championship picture. Before RAW, only three men could legitimately be declared the titleholder. Now, anything goes. That fact certainly wasn't lost on Randy Orton, who contractually could not challenge Triple H while he held the World Heavyweight Championship. Now a very happy Orton, along with a host of other RAW Superstars, could conceivably soon be Champion.

Ultimately, it was up to returning RAW General Manager Eric Bischoff to determine how and when the next champion would be crowned. But Mr. McMahon made one thing quite clear: Triple H is no longer World Heavyweight Champion — a fact that launched The Game into a full-blown rage backstage. That fury boiled over into a tag-team match later in the evening, as Triple H hit everyone in sight with a steel chair — including the referee and, accidentally, Batista.

Edge was no happier with Mr. McMahon's decision, and he called out Randy Orton to take out his aggression. As a result, a match was made between Edge and Orton for next week's RAW from Huntsville, Alabama.

This week in Charlotte, N.C., RAW was Jericho. Y2J took over as GM-for-a-day, and his stint in charge left a lasting impression on the Women's Division. Jericho forced Trish Stratus into a match against Lita. Much to Trish's disgust, Lita became the new Women's Champion despite a heart-stopping suicide dive to the outside. Lita was able to recover, then finish Trish off with a Twist of Fate and top-rope moonsault.

Jericho put another title up for grabs by making a match between Christian and Intercontinental Champion Shelton Benjamin. But in order to earn a shot at the title, Christian had to agree to dress up as “Captain Charisma” for the duration of the match. After initially hesitating, Christian did appear in the pink mask and attire. And it looked like Christian might just pull the match out, but Benjamin caught Charisma with the T-Bone Suplex with the Captain blinded by his own mask, then got the pin.

Maven and Eugene had it out in a full-fledged match after Maven's sneak attack last week. But Maven snapped again, stepping on Eugene's throat beyond the count of five and causing a disqualification. Maven followed that up by smashing William Regal with the ring bell.

Simon Dean joined the ranks of RAW's Superstars, taking on The Hurricane. RAW's resident Superhero couldn't overcome the Simon System, as Dean rolled him up with a handful of tights for the victory. Simon then displayed his patented powder as he celebrated up the entrance ramp.

And it wouldn't have been Jericho's night running RAW without “the biggest party in the history of RAW.” So, Fozzy performed during Y2J's Rock & Roll Limbo-A-Go-Go featuring sizzling Divas Candace, Maria, Melina and Stacy Keibler. Christy won the limbo, but the fun was stopped short by Muhammad Hassan and Khosrow Daivari, who let everyone know that Hassan's debut would come next week on RAW. 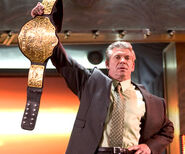 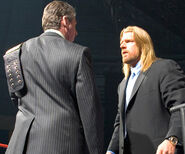 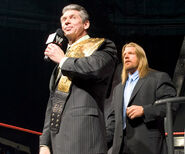 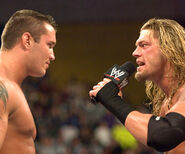 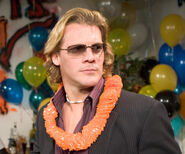 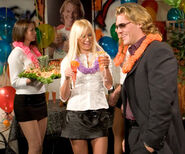 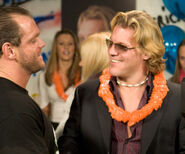 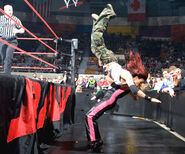 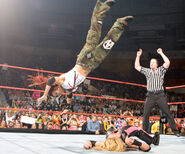 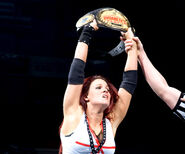 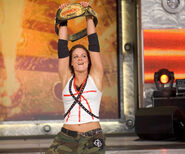 Retrieved from "https://prowrestling.fandom.com/wiki/December_6,_2004_Monday_Night_RAW_results?oldid=1554874"
Community content is available under CC-BY-SA unless otherwise noted.