As if signing an Elimination Chamber match for New Year's Revolution wasn't enough, Eric Bischoff shook things up again on the last Raw of 2004.

As soon as Raw went on the air Bischoff announced there would be a special referee for the Elimination Chamber at New Year's Revolution, but his identity wouldn't be revealed until later in the show. In addition, he declared that it would be a Beat The Clock night for the Chamber participants. Chris Jericho, Randy Orton, Chris Benoit, Edge, Batista and Triple H all had matches against mystery opponents, which would have a huge impact on the Elimination Chamber match.

If any of the Superstars were defeated by their mystery opponent, that opponent would take their spot in the Elimination Chamber. To sweeten the pot even more, Bischoff announced that the Superstar to win his match in the quickest time would enter the Elimination Chamber last, thus giving them the biggest advantage in the match and the best shot at the World Heavyweight Championship at New Year's Revolution.

Chris Jericho defeated Christian; Randy Orton defeated Maven; Edge defeated Eugene; and Chris Benoit defeated Viscera in their respective matches. Benoit made his massive adversary tap to the Cripple Crossface in a prompt 5:43, giving him the time to beat. But that was before Batista hit the ring.

Rhyno, Batista's opponent, scored an early Gore, but Batista kicked out and became enraged and hit a sit-down powerbomb on the Manbeast. Batista looked up the clock and proclaimed that there was plenty of time for more punishment as he delivered yet another devastating sit-down powerbomb for the win at an amazing time of 3:02.

Triple H was infuriated that Batista had gone out and not only beaten the clock, but beaten it in such a quick time. Batista did apologize, stating that Rhyno had made him angry. Flair calmed down the two Superstars, and Triple H headed out to face his challenger as the rest of the Elimination Chamber participants were at ringside watching. Triple H had to face Shelton Benjamin, the same Superstar who gave Evolution fits earlier in the year and had gotten the best of The Game on more than one occasion. In fact, Triple H had never beaten the Intercontinental Champion.

Triple H had the advantage early on. He had a sleeper hold locked in soundly just as time was winding down. The referee picked up Benjamin's arm for a third time, and he dropped it as the clock hit zero, as Triple H thought he had won via submission. But Benjamin had his feet on the ropes, so the match continued. An irate Triple H was starting to let his emotions get the best of him as Benjamin took over. Benjamin was able to hit his T-Bone Suplex, but Flair had distracted the referee. Benjamin then took care of Flair, but that allowed Triple to recover and hit the Pedigree for the win.

As Evolution began to celebrate in the ring, Bischoff returned and announced that the special guest referee for New Year's Revolution's Elimination Chamber match would be none other than "HBK" Shawn Michaels. Triple H, Batista and Edge in particular all looked on in horror as Raw went off the air with Michaels posing for the crowd.

Earlier in the night, Muhammad Hassan and Khosrow Daivari interrupted Stacy Keibler when she was revealing her New Year's resolution, and berated the crowd, telling them that they are all prejudiced towards Arab Americans. They then took their tirade to the announce booth and started pushing around good ol’ J.R. and the King. They later complained to Eric Bischoff, requesting a match against the two, but Bischoff instead told them they could have a debate next week on Raw.

In other action, Lita defeated Molly Holly in a non-title match. After the match, Gene Snitsky came down to the ring and chased Lita through the crowd and to the backstage area, forcing the Women's Champion to lock herself in a room. Bischoff then informed Snitsky that he would be able to continue his fun at New Year's Revolution in a match against Kane. It was also announced that Lita would face Trish Stratus in a rematch for the Women's Championship. 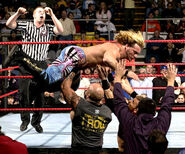 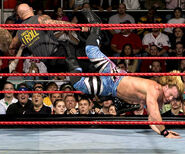 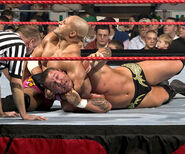 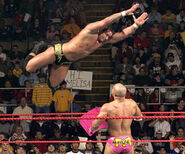 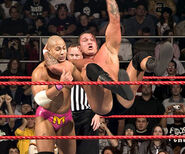 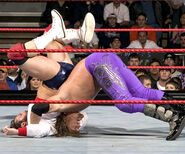 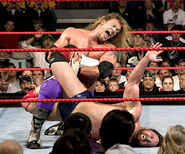 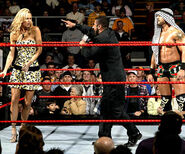 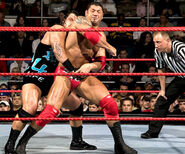 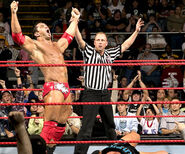 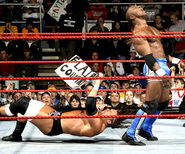 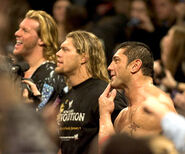 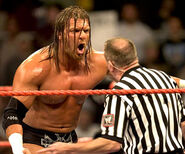 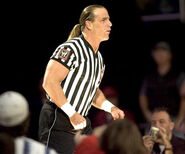 Retrieved from "https://prowrestling.fandom.com/wiki/December_27,_2004_Monday_Night_RAW_results?oldid=1554840"
Community content is available under CC-BY-SA unless otherwise noted.