The December 25, 2013 Edition of Main Event is a Professional wrestling television show of the WWE, it was taped at the American Bank Center in Corpus Christi, Texas on December 19, 2013.

There was no lack of action on Christmas, thanks to a hard-hitting edition of WWE Main Event. Jack Swagger tried to get The Real Americans back into the WWE Tag Team Title picture, taking on Goldust in one-on-one action. In a Six-Diva Tag Team bout, “Total Divas” Natalya & The Bella Twins clashed with WWE Divas Champion AJ Lee, Tamina Snuka & Aksana, while Fandango battled the high-flying Kofi Kingston in preparation for his Intercontinental Championship Match with Big E Langston on this Monday's Raw.

After picking up a tag team victory over “The Brotherhood” on SmackDown prior to WWE TLC, The Real Americans were looking to prove themselves worthy of another chance at the WWE Tag Team Titles. Jack Swagger hoped to get himself and Antonio Cesaro one step closer to championship glory with a win over Goldust on WWE Main Event.

The Bizarre One treaded carefully in the opening moments of the bout, wary of trying to match strength with the powerful acolyte of Zeb Colter. Goldust was able to build up a head of steam, however, sending Swagger retreating with a back elbow. The son of WWE Hall of Famer Dusty Rhodes later lured Swagger in with the promise of a test of strength, only to sock him in the jaw with a right hand.

Goldust went to work on the left arm of Swagger, slamming it into the announcers’ table when he tried to grab a breather. The Real American was able to regain control by sending Goldust crashing to the arena floor, then ramming him into the ring apron. Swagger did everything he could to end the bout, but the veteran Goldust had too much resolve on WWE Main Event.

The aggressive Swagger did his best to wear down Goldust as Colter and Antonio Cesaro bellowed instructions from ringside. With his brother, Cody Rhodes, and the WWE Universe rallying behind him, Goldust willed himself back into the fight, taking Swagger for a ride with a flipping powerbomb.

The Bizarre One later found himself trapped in the Patriot Lock, a fingertip away from the ropes, until Cesaro pulled them out of reach. Rhodes leapt off the steel ring steps to take Swagger's partner out of the equation. The melee distracted Swagger long enough for Goldust to hit the Final Cut and pick up the victory.

The brewing rivalry between “The Brotherhood” and The Real Americans is far from over, though. This Friday on SmackDown, Rhodes will clash with Cesaro in singles action.

Having coming up short against Divas Champion AJ Lee at WWE TLC, Natalya was looking for a measure of retribution on WWE Main Event as she joined forces with The Bella Twins to take on Lee, her personal muscle Tamina Snuka and Aksana in a Six-Divas Tag Team Match.

AJ Lee gloated a little too much too early in the bout and received a boot to the gut from Brie Bella, who was able to wrestle the wiry Lee to the canvas. Aksana didn't fare much better against Natalya. The Lithuanian beauty was quick to tag Tamina into the bout.

Snuka overpowered Natalya, leaving her writhing on the mat in pain and prone to an attack by AJ Lee. Firmly in control, the Divas Champion and her cohorts cut the ring in half, keeping the Hart Dungeon graduate from tagging in her partners.

Natalya was able to evade a running attack from Snuka in the corner and get Nikki Bella into the match. The referee temporarily lost control of the proceedings, as all six Divas traded devastating moves. When the smoke cleared, Nikki was able to roll Snuka up to claim victory for the stars of “Total Divas.”

The fleet-footed Fandango is days away from challenging Big E Langston for the Intercontinental Championship, following his victory in a Christmas Present on a Pole Match this past Monday on Raw. What better way to prepare than to take on Kofi Kingston, a Superstar who has held the title four times?

Kingston continued showing his newfound aggression, wrenching away on the arm of Fandango in the opening moments of the match. The Dreadlocked Dynamo had an answer for everything the ballroom dancer threw his way during their bout Wednesday night.

Fandango took a few seconds to regroup on the arena floor, talking things over with the beautiful Summer Rae at ringside. The dancer was able to retake control of the bout, but Kingston's unmatched agility made it hard to keep it. Fandango slowed The Wildcat down, sending him shoulder-first into the ring post, then slamming Kofi's arm into the steel ring steps.

Fandango continued targeting Kingston's arm, applying various submission holds and driving his knees into his foe's elbow to weaken the limb. He did not focus on Kofi's legs, which still allowed The Dreadlocked Dynamo to leap around the ring with ease.

Things looked dire for Fandango after Kingston connected with the Boom Drop. However, the ballroom dancer avoided Trouble in Paradise, landing a roundhouse kick of his own. The Wildcat made a last ditch effort to hit a high-flying move from the top rope, but Summer Rae jumped onto the apron. The distraction allowed Fandango to knock Kofi off his perch and hit a sit-out suplex from the ropes, followed up by his stunning top-rope legdrop, which sealed the victory.

Big E Langston will be in for a challenge on the final Raw of 2013. Not only will he have to worry about the crafty Fandango, but Summer Rae is sure to do all she can to make sure her dance partner has the Intercontinental Championship around his waist when 2014 starts. 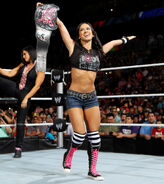 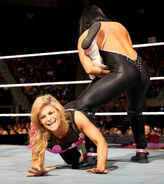 Retrieved from "https://prowrestling.fandom.com/wiki/December_25,_2013_Main_Event_results?oldid=1554826"
Community content is available under CC-BY-SA unless otherwise noted.