December 28, 2016
The December 21, 2016 Edition of NXT is a Professional wrestling television show of the WWE, which took place at the Full Sail University in Winter Park, Florida on November 30, 2016.

Several weeks ago, Billie Kay and Peyton Royce ditched Daria Berenato in the middle of a Six-Woman Tag Team Match, leaving the New Jersey native to fend for herself against three opponents. Since then, Daria has been clamoring to beat up the two Australians.

She got her chance this week against Billie Kay, who looked terrified at the prospect of fighting the former MMA fighter. Daria showed those fears were warranted, pummeling Kay with a barrage of punches. However, Royce's meddling at ringside turned the tides of the bout for her friend, giving Billie the opening to put Daria down for the three-count with a big boot. After the battle, Kay & Royce called out NXT Women's Champion Asuka, saying that The Empress of Tomorrow's claims of no competition were false, and that they would be happy to show her that any time.

The Authors of Pain have made it clear that they are coming for the NXT Tag Team Championship, regardless of who holds the titles. Akam & Rezar showed that there may be no stopping them from achieving that goal this week, as they absolutely demolished their opposition, leaving one unable to continue, forcing the referee to stop the bout and award it to the monstrous duo.

After the bell, Paul Ellering declared that all roads lead to San Antonio for The Authors, who are on a “seek and destroy” mission against the NXT Tag Team Champions, whomever they may be.

The four winners of last week's qualifying matches squared off this week, with an NXT Championship opportunity at TakeOver: San Antonio hanging in the balance. The action was red-hot from the beginning, as Roderick Strong and Andrade Almas engaged in a battle to see who could hit the other the hardest.

With the opportunity of a lifetime on the line, all four competitors threw caution to the wind, like Strong, who took out his three opponents with a twisting dive over the ropes to the arena floor. The NXT newcomer went on a tear after that, culminating with Strong eliminating Almas after a devastating Sick Kick.

But Strong's hot streak came to a crashing halt when he collided with The Perfect 10. Tye Dillinger stopped Strong dead in his tracks with the Tye-Breaker and defeated him, thinning the field down to just him and Bobby Roode.

Dillinger looked to be on fire, showing no signs of the confidence issues that plagued him over the past few weeks. However, The Glorious One survived the Tye-Breaker and picked his spots perfectly, catching Dillinger with a simply glorious DDT to win the No. 1 contendership and a showdown with NXT Champion Shinsuke Nakamura in San Antonio! 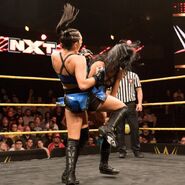 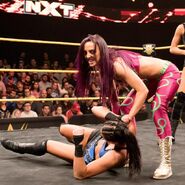 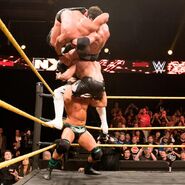