Shane and Bryan's conflict revolved around Bryan's fast-count on Sunday, which The “Yes!” Man claimed he did to protect Shane from himself after he made some questionable officiating decisions earlier in the contest. After a somewhat-heated discussion that saw Bryan tell Shane that he was on the verge of turning into his father, Mr. McMahon, cooler heads prevailed. The Commissioner opted to take off for the night and leave Bryan in control, and the two shook hands before Shane made his exit.

After SmackDown Tag Team Champions The Usos conquered Shelton Benjamin & Chad Gable along with two other tandems while defending the gold at WWE Clash of Champions, Benjamin & Gable looked to bounce back against the twins on Team Blue in non-title action.

Building off their count-out defeat of Jimmy & Jey from several weeks ago, the confident duo of Benjamin & Gable took it right to the champions. The Usos’ unique blend of offense was tough to contain, but Benjamin & Gable made it out of The Uso Penitentiary, as Benjamin scored the 1-2-3 after the duo connected with their devastating double-team maneuver to put themselves right back in the hunt for the coveted titles.

Fresh off Stephanie McMahon's groundbreaking and historic announcement that the first-ever Women's Royal Rumble Match would occur at the Royal Rumble event on Sunday, Jan. 28, streaming live on WWE Network, SmackDown Women's Champion Charlotte Flair simply wanted to make it clear that she would be ready to defend her title against the winner at WrestleMania 34.

Hearing those words, Naomi hit the scene to let The Queen know that she was going to be the first Superstar on Team Blue to declare for the Women's Royal Rumble Match and that the titleholder should expect to see her in New Orleans. This prompted The Riott Squad's arrival, but before Ruby Riott, Sarah Logan or Liv Morgan could get a single word out, Naomi, fed up with the sneak attacks, immediately challenged them to a tag team match, which was accepted.

Riott and Logan answered the call, engaging in a hard-hitting contest against Flair and Naomi. In the height of the action, Liv tried to get involved in the contest by getting up on the apron, but she was knocked off by a surging Logan after Naomi avoided an attack, leading to The Glow picking up the pivotal win with the Rearview.

Fresh off his United States Championship victory over former titleholder Baron Corbin and Bobby Roode at WWE Clash of Champions, Dolph Ziggler threw a Championship Celebration on SmackDown LIVE that was a complete retrospective of his decorated history in WWE, which includes 10 championship wins.

After reminding the WWE Universe of what he's done and who he is through the vintage clips, Ziggler claimed the WWE Universe didn't deserve him, then took the United States Championship off his shoulder, placed it in the middle of the ring and left without saying anything in a very odd moment.

Earlier in the night, Big E, Kofi Kingston and Xavier Woods were really trying to get into the Christmas spirit by handing out pancakes and New Day shirts, but they were interrupted by Rusev & Aiden English, dressed as Santa Claus and a snowman, respectively.

Rusev, or Rusev Claus, declared that the only shirt anyone wanted for Christmas wasn't The New Day's, but Rusev Day's. Rusev then doubled down on the insults by stomping on one of The New Day's pancakes. This, naturally, led to a tag team match against Kingston and Woods.

With the spirit of Saint Nick and fallen flapjacks at their backs, The New Day weathered the best from The Bulgarian Brute and The Picasso of Pain (including an attempted attack that included pie), putting the duo away with a dazzling top-rope elbow drop from Woods onto the now pie-faced English for the win.

What a crummy way to celebrate Rusev Day.

In a star-studded main event, WWE Champion AJ Styles teamed with Randy Orton & Shinsuke Nakamura to take on Jinder Mahal, Kevin Owens & Sami Zayn, with The Singh Brothers lurking at ringside in a thrilling rematch from Tribute to the Troops.

With wounds still cutting deep in the aftermath of WWE Clash of Champions, all six Superstars came in with tempers boiling and ready to pop off with punches. The integrity of the barnburner contest was compromised when The Singh Brothers tried to get involved even after they had been ejected from ringside. The Singhs got a double DDT from Orton for their efforts (just after The Modern Day Maharaja ate an RKO from The Viper), Owens felt the effects of a Phenomenal Forearm from Styles (with Orton adding to The Phenomenal One's mid-air momentum with a shove) and Zayn was felled by a bone-crushing Kinshasa from The King of Strong Style, who scored the 1-2-3 to give his squad the main event W. 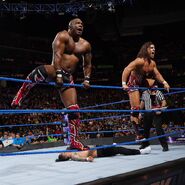 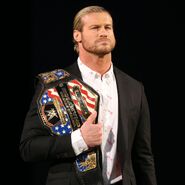 Retrieved from "https://prowrestling.fandom.com/wiki/December_19,_2017_Smackdown_results?oldid=1554631"
Community content is available under CC-BY-SA unless otherwise noted.