The Miz opened SuperSmackDown LIVE by welcoming Dolph Ziggler and a skipping AJ Lee to “Miz TV” in an attempt to get to the bottom of their shocking actions. Joining the controversial pair was Big E Langston, the intimidating force that attacked John Cena on Raw.

When asked why she cost Cena the Money in the Bank contract at WWE TLC and kissed The Showoff one day later, AJ put the blame squarely on Cena, accusing him of playing with her heart. Explaining that she was willing to sacrifice her job as Raw General Manager to keep his name clean, AJ said she had only wanted to grow closer to the Cenation leader. The controversial Diva further claimed Cena had toyed with her emotions by insulting the gifts she made for him and trying to keep her hidden like a “dirty little secret.” In turn, she helped Ziggler “break” Cena at WWE TLC.

When The Miz answered back with a humorous “crazy” jab, the enormous Langston moved in on The Awesome One, prompting AJ to warn The Miz that her friend didn't like when people called her that.

Ziggler corrected The Miz, describing AJ as “passionate,” not crazy. Mr. Money in the Bank added that while Cena may have won the Slammy for Superstar of the Year, at WWE TLC, it was The Showoff who stole the show and Cena's girlfriend.

As The Miz continued cracking jokes at Ziggler and AJ's expense, however, Big E quickly pounced on The Awesome One. The intimidator in AJ's corner again showed the WWE Universe what he is capable of, unleashing a major assault that floored The Miz.

After Team Rhodes Scholars overcame Rey Mysterio & Sin Cara in a WWE Tag Team Champions No. 1 Contenders’ Tables Match at WWE TLC, the rivalry between the duos continued on Raw, where Cody Rhodes defeated Sin Cara and Rey Mysterio bested Damien Sandow. In an attempt to break that stalemate, Sin Cara took to action against Sandow on SuperSmackDown LIVE.

Almost immediately, it became clear something was wrong, for after Sin Cara made his entrance, Mysterio — who was expected at ringside to cheer on his teammate — didn't answer his music. As a result, Sin Cara would have to go it alone, whereas “The Intellectual Savior of the Masses” had the devious Rhodes lurking at ringside.

Not long after the bout got under way, the confusion surrounding The Ultimate Underdog's whereabouts dissipated when The Shield trio of Dean Ambrose, Seth Rollins & Roman Reigns entered the ringside area and tossed Mysterio's trademark mask into the squared circle. This shocking development distracted Sin Cara, allowing Sandow to seize the moment and take down the gravity-defying Superstar with Terminus.

The Shield's incendiary tactics did not stop there. After the pinfall was counted, The Shield descended on their prey, attacking the war-torn Sin Cara in vicious fashion.

Later, it was reported that Sin Cara had suffered serious knee damage from the attack, while Mysterio — who was found down and out in the locker room area — had sustained a severe neck injury. Both were taken to a local medical facility.

After Tensai was openly insulted by Santino Marella during the Slammy Awards presentation on Raw, the massive Superstar came looking for vengeance in a fierce SuperSmackDown LIVE showdown.

Despite enduring an enormous amount of punishment in the early going, The Milan Miracle was able to keep his wits about him. Tensai used his large cranium to deny his opponent's Cobra strike, but when the super heavyweight soared for a Senton splash, Santino got out of the way and grabbed a quick victory on his tattooed opponent.

Rebounding from a vicious post-match assault at the hands of Wade Barrett on Raw, Kofi Kingston teamed with Team Hell No to take on The Barrett Barrage & The Prime Time Players. But before heading into action, the determined “Wildcat” joined Kane and a very upset Daniel Bryan in discussing The Shield, The Slammys and WWE Hall of Famer “The Nature Boy” Ric Flair.

The match that followed was heated from the start, with emotions running extremely high after the fevered events of WWE TLC and Raw. Once all order broke down, Titus O’Neil & Darren Young tried to use a numbers advantage against The Big Red Monster. As the swaggering duo prepared to spring on Kane, Bryan tripped O’Neil, leaving Young alone with the masked monster. Moments later, Kane secured victory for his team by hitting a towering Chokeslam for the three-count.

The always-outspoken CM Punk journeyed to SuperSmackDown LIVE to chastise the WWE Universe for voting John Cena “Superstar of the Year” at the previous night's Slammy Awards ceremony.

After relentlessly mocking the WWE fans in Pittsburgh, Punk criticized Cena for presenting the Slammy trophy — which Punk called “his” — to WWE Hall of Famer Ric Flair. He also claimed Flair's 16 World Titles over a span of a “95-year career" were simply not as impressive as Punk's accomplishment of holding the WWE Title for nearly 400 days.

The crowd exploded when Ryback suddenly interrupted the irate WWE Champion. Though Paul Heyman urgently insisted Punk was not medically cleared to compete, Ryback promised he will be waiting for The Second City Saint as soon as he is ready for action. The hungry No. 1 contender even went so far as to give a specific date, vowing to win Punk's WWE Championship on the very first Raw of the New Year, Jan. 7, 2013!

While United States Champion Antonio Cesaro did manage to get himself intentionally counted-out of his match against Ryback on Raw, he soon found himself in a return match on SuperSmackDown — just moments after the WWE Universe learned Ryback is the newly named No. 1 contender to the WWE Title.

Although Cesaro did attempt to pick up the easy win by count-out while going on an impressive offensive attack, Ryback would soon roar back and hit Shell Shocked for another dominating victory.

As Kaitlyn was making her way to the ring for a Divas Title opportunity, AJ Lee approached her to wish her luck. But considering the roller coaster–like history between them, it's not surprising Kaitlyn chose to balk at her former friend's good wishes. As a result, AJ attacked her from behind, sparking absolute chaos between them.

Despite the turmoil, Kaitlyn still competed for the Divas Title. And when she finally gained the advantage over the tough Eve, the reigning champion opted to get herself disqualified rather than lose the butterfly-emblazoned championship.

tensions rose between SmackDown General Manager Booker T and his Senior Advisor Theodore Long when Teddy put Booker on the spot by suggesting he consider Brad Maddox as a SmackDown Superstar.

Nevertheless, Maddox was granted a match. After reintroducing himself to the SuperSmackDown crowd, the former WWE referee promised to win his match and a contract to be a WWE Superstar.

His confidence vanished, however, when the former WWE referee discovered he would be facing Brodus Clay — and for good reason. For after dissecting the outmatched hopeful, The Funkasaurus flattened Maddox with a splash for the win.

But before he could catch his breath, Brodus suffered a sneak attack by The Shield, who took out the massive Superstar with their trademark Triple Powerbomb.

With all the actions of the past week — from WWE TLC to Raw to “Miz TV” earlier in the night — it is no wonder the SuperSmackDown LIVE main event would be very personal for all four Superstars involved.

And with Big E Langston and AJ Lee looking on at ringside, that is exactly what it was. While the determined Big Show & Ziggler combination maintained an impressive advantage for a good amount of the match, once the resilient Celtic Warrior reached his partner, the leader of the Cenation took charge.

As he did, Sheamus also regrouped, knocking an interfering Big Show over the top rope and out of the ring. This sparked a brawl between the giant and his Irish adversary all the way up the ramp.

Back in the ring, Cena hit the Attitude Adjustment, signaling he was about to put the match to bed. Before he could capitalize, however, Big E entered the ring — at the behest of AJ. Without warning, he clobbered Cena, obliterating the 10-time WWE Champion for the second time in as many nights. 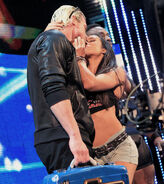 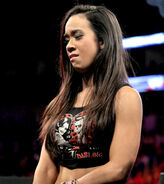 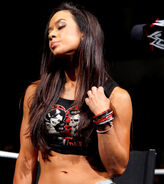 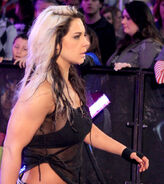 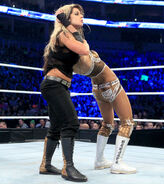 Retrieved from "https://prowrestling.fandom.com/wiki/December_18,_2012_Smackdown_results?oldid=1554617"
Community content is available under CC-BY-SA unless otherwise noted.