December 21, 2016
The December 14, 2016 Edition of NXT is a Professional wrestling television show of the WWE, which took place at the Full Sail University in Winter Park, Florida on November 30, 2016.

NXT Champion Shinsuke Nakamura and Samoa Joe's storied rivalry wrote arguably its greatest chapter yet, as the two bitter rivals clashed inside a steel cage. After The King of Strong Style won the NXT Championship back from Joe in Osaka, Japan, a determined Joe immediately demanded a rematch inside a Steel Cage.

The steely surroundings proved to be the perfect confines for this huge NXT Championship Match as Nakamura and Joe waged war in front of the NXT Universe in Australia. The titleholder and his challenger took turns ruthlessly beating one another inside the unforgiving steel structure.

These fierce warriors left it all out in the ring as they not only fought one another, but battled pure exhaustion as their epic war came to a close. In the end, it was Nakamura's spectacular Kinshasa on Joe while balancing on the middle of the top rope that would ultimately spell the end for the submission specialist. The champion seemingly had an opportunity to walk uncontested out of the steel cage, but chose to slam the door shut. Instead, Nakamura proceeded to hit not one, but two more devastating Kinshasas on Joe for the pinfall victory.

The new No. 1 contender to NXT Champion Shinsuke Nakamura will be decided in a Fatal 4-Way Match next week, but first, a quartet of competitors had to win their way into this contest. The first of the four bouts to determine the Superstars in next week's showdown saw Tye Dillinger battle SAnitY's Eric Young.

Despite questions about Dillinger's mental state following a series of hard-fought losses, The Perfect 10 looked impressive as he took the fight to Young. The bout was interrupted, however, as the crazed Nikki Cross jumped on the back of the Canadian Superstar, causing a disqualification. Dillinger managed to avoid an all-out attack from SAnitY, but ultimately was blindsided by the monstrous Big Damo. The rugged giant destroyed Dillinger as SAnitY watched from the ramp, again bringing questions about Damo's motivation.

Although Dillinger was left laid out in the middle of the ring, the embattled Superstar advanced to next week's Fatal 4-Way No. 1 Contender's Match.

Andrade “Cien” Almas’ new, more aggressive attitude has been paying dividends recently for the highly acclaimed luchador, as he managed to go toe-to-toe with No Way Jose in a hard-hitting battle.

Almas not only withstood Jose's powerful attack, but would ultimately prevail after hitting a vicious DDT for the pinfall.

Since returning from injury, Elias Samson has appeared stronger than ever. The Drifter utilized his size and strength to overpower Roderick Strong in the early goings of their No. 1 Contender's Fatal 4-Way Qualifying Match.

Samson inflicted one maneuver after another against Strong, but the wily veteran withstood the offensive onslaught. Perhaps purposely letting the lager Samson tire himself out, “The Messiah of the Backbreaker” would eventually pounce, hitting his opponent with a rapid-fire attack. After Samson was left staggering, Strong hit a gut-buster followed by a running boot to the face for the victory.

Bobby Roode vs. Oney Lorcan made for an explosive main event, as they battled for the final spot in next week's No. 1 Contender's Fatal 4-Way Match. Although Roode's pompous attitude may not endear himself to everyone in the NXT Universe, the glorious Superstar backed up his confidence with an impressive victory over the hard-hitting Lorcan.

The surly Lorcan had Roode on his heels with a powerful uppercut, but he ended up running straight into a spinebuster followed by a DDT from Roode. The glorious Superstar will go on to compete in next week's Fatal 4-Way Match against Tye Dillinger, Andrade “Cien” Almas and Roderick Strong to determine the new No. 1 contender to Shinsuke Nakamura's NXT Championship. 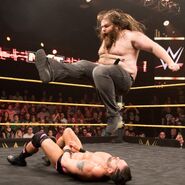 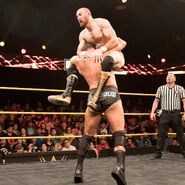 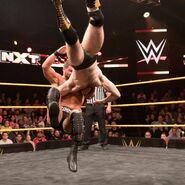