Kicking off the festivities for the prestigious Slammy Awards, surprise guest and former WCW World Heavyweight Champion David Arquette announced the winner of the Slammy for Shocker of the Year: The debut of The Nexus. As the group's leader – for now – Wade Barrett accepted the statuette on Nexus’ behalf.

After a rather self-serving speech, the Englishman was in for yet another shocker. The anonymous Raw General Manager arranged a match pitting him against Big Show. As it appeared The World's Largest Athlete was poised for victory, Barrett snatched his Slammy and fled up the entrance ramp, allowing Show to win by count-out.

Kelly Kelly and Tyson Kidd were on hand to introduce the winner of the Despicable Me Slammy Award for the most treacherous act of 2010. Before revealing the winner, though, Kidd took a moment to introduce his mountainous bodyguard, Jackson Andrews. He then announced the recipient as CM Punk, for his harassment of Rey Mysterio’s family. Well deserved, if not incredibly vile.

Pee Wee’s big adventure continues! WWE Tag Team Champions Santino Marella & Vladimir Kozlov revealed that the star of stage and screen had won for Guest Star Shining Moment of the Year, after which Herman offered his acceptance speech via TitanTron.

Mirror, mirror on the wall, who’s the fairest of them all? In his match against Mark Henry, “Dashing” Cody Rhodes not only defeated The World’s Strongest Man, he looked good doing it, too – but of course.

Just after John Cena won the award for Holy %@*^ Move of the Year – thanks to nailing Batista with an Attitude Adjustment from a car and through a stage – another Holy %@*^ moment occurred. Wade Barrett took to the ring and announced that he was rehiring his arch-nemesis John Cena, but only under two conditions. First, Cena must face his former Nexus boss in a Chairs Match at WWE TLC: Tables, Ladders & Chairs this Sunday. Secondly, Cena was forced to battle David Otunga later in the evening.

Looking a great deal happier than during her signature moment, “Angry Miz Girl,” whose real name is Cayley, accepted the Slammy Award for WWE Universe Fan Reaction of the Year. Afterward, WWE Champion The Miz swept in a snagged her statuette. Sigh.

The “Cleveland Screamer,” flanked by his assistant Alex Riley and Hollywood star David Arquette, talked smack about Randy Orton, who he will face in a Tables Match at the WWE TLC pay-per-view. Before Miz could retreat to the locker room area, Raw's anonymous GM announced that The Awesome One must face former world champion Rey Mysterio.

The WWE Champion managed to fend off The Master of the 619 when Alberto Del Rio distracted him. But as Miz and his minions celebrated, the Raw GM arranged a second match. In this one, Riley & Arquette would team up against Orton in a 2-on-1 Handicap Match.

Not only did Edge present the award for “Oh Snap” Meltdown of the Year, he also took home the Slammy himself. With his former tag team partner Christian at his side, The Rated-R Superstar locked it up when he destroyed the Raw GM's computer.

The animosity between Sheamus and John Morrison was abundantly evident when the two faced off. So intense were they that each was disqualified for not separating under orders of the referee. To settle their differences, the Raw GM announced that the pair would face one another in a Ladder Match at WWE TLC with the winner of the bout becoming the No. 1 contender for the WWE Title.

The odd pairing of William Regal and JTG presented the Slammy for Knucklehead Moment of the Year to the mean pairing of Layla & Michelle McCool. The two clinched the award for losing a match to Mae Young. After a self-congratulatory speech, Lay-Cool headed to the ring to compete in a Diva Battle Royal for the Diva of the Year Slammy Award.

Shortly after capturing a prestigious Slammy Award for Knucklehead Moment of the Year, Michelle McCool went for two – and scored. As one half of Lay-Cool, the callous blond ran a gauntlet in a Diva Battle Royal and, eventually, ousted Divas Champion Natalya to win the match and the Slammy Award for Diva of the Year.

Although she and partner Layla celebrated, their party was cut short. Raw's GM announced that Lay-Cool must compete at WWE TLC against Natalya and her partner Beth Phoenix in a first-ever Divas Tag Team Tables Match!

In his war on “all things stupid,” Edge explicitly called out Jack Swagger for a number of offenses, but after their match tonight, “The All-American American” was “smarting” pretty bad. The Ultimate Opportunist thwarted his opponent's ankle lock when he leveled Swagger with a devastating Spear.

Watching Shawn Michaels accept the Slammy Award for WWE Moment of the Year – even via satellite – many realized just how much they miss The Showstopper. Michaels won the accolade for his final match, but a lot of the WWE Universe is still holding out hope that it won't be his last.

Despite the odds, Randy Orton would not be denied. The Viper clashed with David Arquette & Alex Riley in a 2-on-1 Handicap Match. Although Orton has certainly proven himself, Arquette's extensive résumé also includes a stint as former WCW World Heavyweight Champion. Despite that, Orton demolished his hapless foes.

As WWE Champion The Miz observed his WWE TLC opponent from ringside, Orton pinned his assistant for the win. Afterward, Miz attacked Orton and set up a table in the center of the ring. Before he could splinter the pine, however, The Viper recovered and sent Arquette straight through.

Michael Cole captured his second Slammy Award when he took home the golden statuette for the “And I Quote …” Line of the Year. He thanked his "Cole Miners" as well as The Miz for the honor.

The WWE Universe has stood by John Cena over the course of a difficult year. Their latest show of support came in the form of a Slammy Award for WWE Superstar of the Year, which was voted on by the WWE Universe, exclusively on WWE.com. After Cena's acceptance speech, the Superstar changed gears to prepare for his match against David Otunga.

As a newly rehired employee, Cena showed the WWE Universe why he loves his job. He faced off against Otunga in singles competition. During the bout, Nexus leader Wade Barrett ordered the rest of Nexus off the stage and away from the ring, presumably to prevent them from assisting Otunga. If that was the Englishman's intent, he succeeded wildly. Cena locked the STF on his Nexus opponent and forced Otunga to tap out. He then grabbed a chair and proceeded to repeatedly smash Otunga as Barrett, his opponent in a Chairs Match at WWE TLC, looked on uneasily. 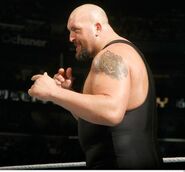 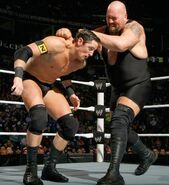 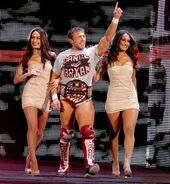 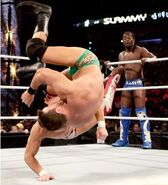 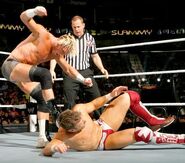 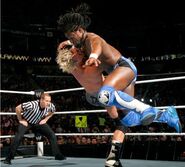 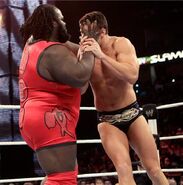 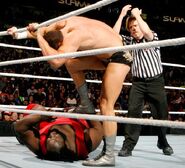 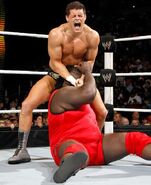 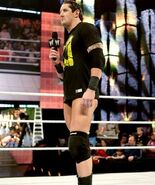 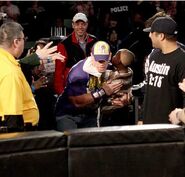 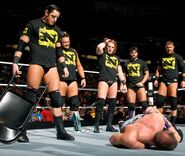 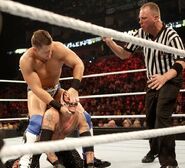 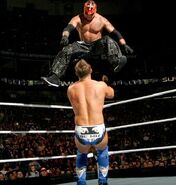 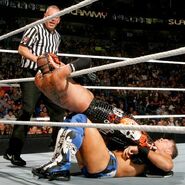 Retrieved from "https://prowrestling.fandom.com/wiki/December_13,_2010_Monday_Night_RAW_results?oldid=1554585"
Community content is available under CC-BY-SA unless otherwise noted.