December 18, 2013
The December 11, 2013 Edition of Main Event is a Professional wrestling television show of the WWE, it was taped at the Moda Center in Portland, Oregon on December 10, 2013.

Although he no longer holds the prestigious Intercontinental Title and has ditched Paul Heyman, Curtis Axel continues to make a name for himself and he entered Portland knowing that a victory against a former World Heavyweight Champion would provide a great deal of momentum going forward.

Well aware of Ziggler's speed and amateur wrestling background, Axel displayed his own technical prowess in an effort to keep his opponent reeling. Both Superstars grappled back and forth with The Showoff taking control after following up a neckbreaker with a flurry of elbows.

Proving his resilience, Axel continued to battle back as Ziggler's offensive was pushed into overdrive, finally getting time to regroup when the former World Heavyweight Champion crashed to the outside. The son of WWE Hall of Famer Mr. Perfect took advantage, methodically striking at his opponent and trying to dismantle The Showoff's ability to compete.

Nevertheless, Ziggler and Axel traded momentum throughout the remainder of the contest, neither Superstar maintaining an advantage long enough to secure a pinfall. Frustration mounted for both Ziggler and Axel as nothing seemed to be enough. Watching the match from ringside, Ryback finally had enough and ascended to the ring apron only to be knocked down by Ziggler. However, the opening was all Axel needed to execute his patented neckbreaker for the win.

In preparation for her Divas Championship Match at WWE TLC against AJ Lee, “Total Divas” star and third-generation Diva Natalya battled fellow former Divas Champion and rival Alicia Fox on WWE Main Event. Natalya's technical ability and Alicia Fox's agility certainly made for a competitive contest that kept the WWE Universe in Portland on the edge of their seats. In the opening moments of the contest, Natalya leveraged her mat abilities with her strength, preventing her opponent from mounting any offense.

Never one to back down, Alicia fought free of Natalya's hold and did her best to strike hard and fast, nearly ending the contest with a huge boot to the face. Fox then displayed her own technical prowess, nearly securing victory a second time. However, Natalya remained resilient and successfully countered a pinfall into The Sharpshooter to secure the win.

In recent weeks, rookie Xavier Woods has drawn the ire of Brodus Clay after borrowing his entrance music and The Funkadactyls. Woods and his mentor, R-Truth, have defeated Tons of Funk in tag team action, but an infuriated Clay managed to beat the NXT standout on Raw. Following the battle, The Funkasaurus continued to attack Woods until Tensai pulled him away.

In his WWE Main Event debut, Woods continued to display his incredible athleticism, kicking off the tag team battle against Tensai and immediately taking the massive competitor off his feet. Using his raw power to take control, though, Tensai tagged in Brodus Clay, who immediately let out his aggression on his new rival.

Following a methodical onslaught at the hands of The Funkasaurus, Woods barely tagged in R-Truth who shifted the tide in their favor. The Rapping Superstar kept Clay reeling and losing focus, resulting in a heated verbal exchange between the members of Tons of Funk.

Refocused, Tons of Funk relied on their teamwork and power to regain control of the contest, preventing R-Truth from tagging in Xavier Woods. Exhausting the last of his energy, R-Truth took down The Funkasaurus and finally tagged Woods. Rested, the rookie Superstar knocked Tensai off the ring apron and avoided any powerful maneuvers at the hands of Clay. Making a tag without The Funkasaurus being aware, Woods took the brunt of a suplex, allowing R-Truth enough time to sneak in and pin Clay for the win.

Enraged by the outcome, Clay began attacking R-Truth after the match. Tensai tried to stop his partner and the two stared each other down before Clay left the arena. 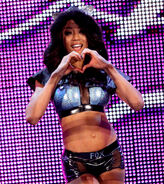 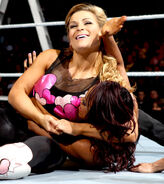 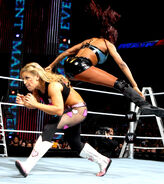 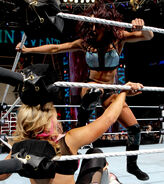 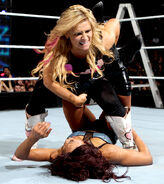 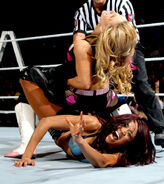 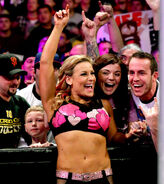 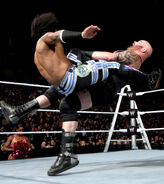