The Buried Alive Match can literally change the direction of one's career. The object of this match is to throw your opponent into a six-foot-deep grave. Once he is in, the wrestler must then bury his opponent with dirt.

This match usually used for giving rest to The Undertaker from wrestling for several months or to change his gimmick as he has participated in all of the 5 Buried Alive matches and has won two; one of them which was also a tag-team match for the World Tag Team Championship. One of WWE's most-storied Buried Alive Matches saw Undertaker fall to Mr. McMahon. As a result, Taker was missing from the WWE scene for months. When he returned at WrestleMania XX, however, Undertaker was The Deadman of old.

History of the Buried Alive match 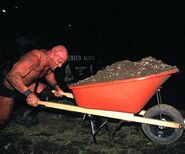 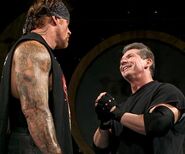 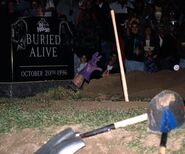 Retrieved from "https://prowrestling.fandom.com/wiki/Buried_Alive_match?oldid=981309"
Community content is available under CC-BY-SA unless otherwise noted.