17
Bound for Glory is the name given to pay-per-view events held by Impact Wrestling (formerly Total Nonstop Action Wrestling) mostly in the month of October. Bound for Glory is billed as the company's premier annual event, much in the same vein as WWE's WrestleMania, WCW's Starrcade and ECW's November to Remember.

Plans for Bound for Glory were originally discussed in 2003, and an angle featuring TNA mainstay Jeff Jarrett assaulting free agent Hulk Hogan with a guitar following a New Japan Pro Wrestling show at the Tokyo Dome was filmed on October 13, 2003. For several weeks thereafter, TNA hinted at a future match between Hogan and Jarrett, possibly as the featured match for the planned event. It was also rumoured that Kevin Nash and Scott Hall would be brought in for the event. However, Hogan opted for surgery to get a hip replacement for his ailing hip, and the Bound for Glory plans were scrubbed.

Bound For Glory dates and venues 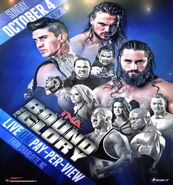