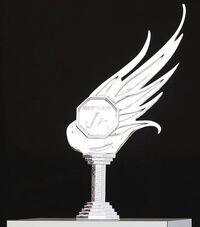 The tournament was formed in 1988 by NJPW. It was originally called the Top of the Super Juniors. The tournament is a round-robin style tournament where a wrestler scores points. The winner, assuming they are not already the champion, receives an opportunity to wrestle for the IWGP Junior Heavyweight Championship not long after the tournament is over.

In 1994, the tournament was renamed to the Best of the Super Juniors. Since 1996 the tournament has been divided into a two-block system used in many other puroresu tournaments. In this format the top two scorers in each block advance to the semifinals, at which point single-elimination rules take effect. During the round-robin portion, a win is worth two points, a draw is worth one, and a loss zero; all matches have a 30-minute time limit, though in the past it has been twenty minutes.

Retrieved from "https://prowrestling.fandom.com/wiki/Best_of_the_Super_Juniors?oldid=1539910"
Community content is available under CC-BY-SA unless otherwise noted.