Bellatrix Female Warriors is an English professional wrestling promotion. It was founded in 2006 by female wrestling veteran Sweet Saraya as a sister organization to the World Association Of Wrestling. It holds events and shows throughout the England area and features local as well as international talent. Originally established as the World Association of Women's Wrestling (WAWW), the company was renamed to its current name in 2011. 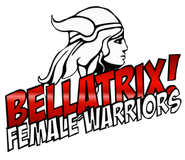 Retrieved from "https://prowrestling.fandom.com/wiki/Bellatrix_Female_Warriors?oldid=1640985"
Community content is available under CC-BY-SA unless otherwise noted.