A Beat the Clock match is a series of singles matches between different wrestlers to see which wrestler can win their match in the shortest amount of time. Each wrestler involved competes in one match, and it is generally assumed that these wrestlers do not face each other, instead facing jobbers (or occasionally for heel characters, a confidant that will gladly lay down for them).

Beat the Clock matches are often fought for a stipulation, such as a championship or the privilege of final entry in a multi-competitor match. 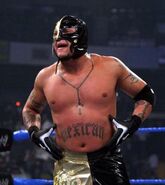 Becky Lynch
Add a photo to this gallery
Retrieved from "https://prowrestling.fandom.com/wiki/Beat_The_Clock_Challenge?oldid=1516932"
Community content is available under CC-BY-SA unless otherwise noted.