Bash at the Beach

Bash at the Beach was a yearly pay-per-view event produced World Championship Wrestling (WCW). It was the company's PPV for the month of July, held from 1994 to 2000. The show centred around a beach theme, with the set around the entrance area for the wrestlers decorated with such things as surfboards and sand. The theme for the show seemed appropriate for an event scheduled during the hot summer month of July. The beach/"fun in the sun" theme was also reflected in the places where WCW chose to hold the event; all of the shows emanated from cities in either Florida or California, two U.S. states renowned for their warm weather. It was WCW's response to WWF's SummerSlam. In 1992 and 1993, WCW held a beach-themed pay-per-view show known as Beach Blast, which was the forerunner to Bash at the Beach. However, the 1992 show was held in June, as the company elected instead to reserve July for its flagship summertime extravaganza, The Great American Bash.

Bash at the Beach dates and venues 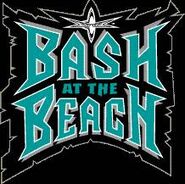 WCW Bash at the Beach - The first promotion to use the event.