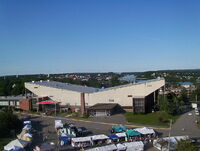 The Bangor Auditorium was a 5,948 seat multipurpose arena located in downtown Bangor, Maine. It opened October 1, 1955 and was used for concerts (maximum capacity 6,800), sporting events, circus performances, political rallies, as well as trade shows with 16,000 square feet (1500 m²) of space. It shared the same complex as the Bangor Civic Center. For decades, it hosted the Maine Principals' Association basketball tournament each February, as well as the graduation ceremonies for Bangor High School in June. It also served as the home of the University of Maine Men's and Women's basketball teams for a few seasons until 1992. The V-shape style of the building gave it the look of giant wings and adds to the atmosphere. A statue of Paul Bunyan towers outside as a symbol of the city's prosperous history as a lumber port in the early-to-mid-19th century.

Retrieved from "https://prowrestling.fandom.com/wiki/Bangor_Auditorium?oldid=980938"
Community content is available under CC-BY-SA unless otherwise noted.