August 16, 2017
The August 9, 2017 Edition of NXT is a Professional wrestling television show of the WWE, which took place at the Full Sail University in Winter Park, Florida on July 12, 2017.

After being one-upped by the NXT Tag Team Champions The Authors of Pain two weeks earlier, SAnitY struck again, but this time they would not be stopped.

The unhinged Nikki Cross began NXT in the middle of the ring, flanked by Alexander Wolfe and Killian Dain, screaming for Akam & Rezar to come out. The monstrous titleholders soon appeared, but SAnitY's returning leader, Eric Young, turned the odds in the favor of his frightening faction.

Young zip-tied Rezar to the barricade next to the entrance ramp, allowing SAnitY to brutalize Akam inside the ring. Rezar attempted to make his way back into the squared circle, but he, too, would end up beaten down by the crazed foursome.

Cross giddily grabbed the NXT Tag Team Titles as SAnitY stood tall in the middle of the ring above the fallen champions. Is this a preview of what's to come on Saturday, Aug. 19, at TakeOver: Brooklyn III?

The ultra-athletic Street Profits didn't disappoint in their NXT debut, soaring past The Metro Brothers with an eye-opening offensive arsenal.

Chris & JC Metro tried to ground Angelo Dawkins & Montez Ford, but the charismatic tandem could not be contained as Ford put an exclamation point on The Street Profits’ in-ring debut with a Frog Splash for the victory.

NXT Champion Bobby Roode and his TakeOver: Brooklyn III challenger Drew McIntyre met face-to-face in the middle of the ring in what turned out to be a drama-filled affair.

Perhaps proving to be clairvoyant, The Glorious One, who claimed Roderick Strong was after him, showed up with his own security detail.

It didn't take long for Roode and McIntyre's verbal throw-down to get heated as the NXT Champion proudly affirmed his entitlement, once again declaring the black-and-yellow brand as “My NXT!”

The No. 1 contender couldn't hide his surprise at the titleholder's massive ego, but the escalating confrontation would be interrupted by Strong before the encounter turned physical.

Strong was determined to exact payback for Roode disrespecting his fiancé and family, much to the chagrin of General Manager William Regal, who wasn't about to have his TakeOver: Brooklyn III main event thrown off track.

Roode came up with an idea that seemed to appease everyone, even Regal. Next week on NXT — just three days before TakeOver: Brooklyn III — Strong will battle McIntyre in a head-to-head showdown. If Strong can defeat the Scottish Superstar, then he will get his match against Roode at a future date.

Either way, the NXT Universe is still in store for the much-anticipated NXT Title Match between Roode and McIntyre on Saturday, Aug. 19, at TakeOver: Brooklyn III.

Two of NXT's hardest hitters faced off in a rematch as Oney Lorcan and Danny Burch laid into one another in a technical showdown-turned-slugfest.

Both veteran grapplers sized each other up in the early goings as they traded holds before eventually letting loose with a barrage of European uppercuts and ringing chops.

Burch and Lorcan took turns unleashing vicious blows before Lorcan locked in the Boston Crab. Unlike their previous encounter, in which Burch was forced to submit, the East Londoner reversed Lorcan's submission attempt into a pinfall victory, bringing them to one win apiece.

With the gritty Superstars showing mutual respect after the contest by shaking hands, is the NXT Universe in store for a rubber match?

With Zelina Vega in his corner, Andrade “Cien” Almas showed off a new and improved tenacity en route to defeating No Way Jose.

While Almas still fell into his old habits of showboating during the bout, Vega was quick to scold Almas and keep him on the attack. When Almas went for a lackadaisical pin cover, Vega ordered the highly talented luchador to “finish him,” to which Almas promptly responded with a hammerlock DDT for the victory.

Following the match, Vega further proved her influence by taking a microphone from the NXT announce table before telling the NXT Universe that if Johnny Gargano is still looking for an opponent at TakeOver: Brooklyn III, “he’s got one!” 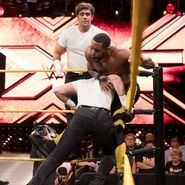 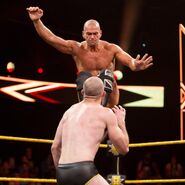 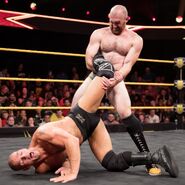