The August 9, 2010 Edition of RAW is a Professional wrestling television show of the WWE's RAW brand, which tool place on August 9, 2010 at the ARCO Arena in Sacramento, California.

Like a runaway sailboat careening toward SummerSlam, Team WWE fought and flailed as if in the eye of the storm. With just six days left, however, will the crew finally right themselves in time, or are they destined to crash against the rock solid unity of The Nexus?

Oh, Canada! With just six days until SummerSlam, Bret Hart took a break from training in Calgary to address the further deterioration of Team WWE. The legendary Canadian appeared ready to convince his fellow countrymen, Edge and Chris Jericho, to rejoin the group.

First out, the arrogant Jericho proved as condescending and stubborn as ever, rebuffing the advice of the WWE Hall of Famer. Next up, The Ultimate Opportunist praised "Hit Man" before turning on him and attacking. Hart countered and sent Edge to the mat, at which point, Jericho jammed a thumb in Hart's eye. The attack came as Edge & Jericho prepare to face The Excellence of Execution & John Cena in a tag team match later in the evening.

As the two scoundrels retreated, Hart's niece, Natalya, hurried to the ring. She breathlessly informed her uncle that The Nexus had just ambushed The Hart Dynasty—seemingly in an effort to prevent them as replacements on Team WWE.

It had been a rough couple of weeks for United States Champion The Miz. Despite capturing the Money in the Bank contract, The Cleveland Screamer found himself stymied during his attempts to cash in. This week, he gained a head of momentum after facing Evan Bourne in a non-title match. Although the high-flyer has been soaring lately, the U.S. Champ clipped his opponent's wings for the victory.

Ring rust? What ring rust? Last week, Melina sent a message to Divas Champion Alicia Fox that she is back and intensely focused on regaining the Butterfly Championship that she had to relinquish due to injury several months ago. This week, Melina's message got a whole lot louder. Not only did the homecoming queen defeat Alicia in a non-title bout, but the anonymous Raw General Manager arranged a Divas Title Match between the two at SummerSlam.

The Nexus persist in brutalizing any Superstar even considering joining Team WWE. The carnage continued with Mark Henry. In the locker room area, The World's Strongest Man asked Team WWE members John Morrison and R-Truth to consider his bout against Ted DiBiase his audition to join their SummerSlam squad. Once The Nexus got wind of Henry's hopes, they quickly dashed them by attacking before the match, leaving Henry battered and immobile.

In six days, the question will be answered. For now, though, the WWE Universe is wondering: Who will hold the WWE Title after SummerSlam? The latest evidence to ponder came when current champion Sheamus called out his SummerSlam opponent Randy Orton. As the two fierce competitors jawed back and forth, the anonymous Raw General Manager intervened via email. Through his spokesman, announcer Michael Cole, the GM stipulated that were any Superstar to interfere in the match, they would be suspended indefinitely. The GM also encouraged the Irishman to retaliate against The Viper's claim that he's scared of him.

A melee ensued between the two, and when the dust had settled, it was Orton who had bested his rival. Although The Viper could have punted Sheamus in the skull, he uncharacteristically stopped short and instead, he actually handed the WWE Championship to the dazed Irishman.

As the second season of WWE NXT rockets skyward, six NXT Rookies brought their talents to Monday night. Husky Harris, Michael McGillicutty & Alex Riley faced down Kaval, Percy Watson & Lucky Cannon. In the end, it was the burly Harris who snuffed out the agile Kaval to win for his team. It was the third win in a row over Kaval for the "Army tank with the Ferrari engine."

Afterward, a still fuming WWE Champion Sheamus, who had been stewing ringside after his encounter with Randy Orton, charged the ring and further punished Kaval before barking out his frustration to the WWE Universe.

Prior to their match against William Regal & Zack Ryder, R-Truth & John Morrison made it clear that they wanted to present a strong, united front. Mission accomplished.

Truth & Morrison, both members of Team WWE, demonstrated that they are prepared for their match against The Nexus at SummerSlam, come what may. With their SummerSlam aspirations in question, Truth & Morrison dominated the Brit & the Twit to notch an impressive victory.

Ya gotta love summer. In a Triple Threat Tag Team Match, six sexy, smart and powerful Divas flooded the ring in a battle of bikini-clad beauties: The Bella Twins vs. Eve & Gail Kim vs. Maryse & Jillian. As the lucky duo of Santino Marella & Vladimir Kozlov shared referee duties, Brie & Nikki took control and overcame their strong and stunning opponents for the win.

The Nexus have officially taken down their biggest prey to date. Earlier in the evening, The Great Khali had challenged Wade Barrett to a match. Before the bout could take place, however, The Nexus ambushed The Punjabi Playboy, clubbing his knee. WWE doctors have determined that The Great Khali suffered patella and ligament damage and is unlikely to compete at SummerSlam.

In the wake of the season's biggest bash, SummerSlam, Justin Long will roll into Los Angeles to act as special guest host of Raw. As the star of the comedy feature film Going the Distance, the actor promises to bring some must-see action to Monday night.

Marvels never cease. In a match that pitted snarling enemies, John Cena & Bret Hart faced down Edge & Chris Jericho in a battle of current Team WWE members against two Superstars who had left the squad high and dry. To dial up the tension, members of The Nexus were stationed outside the ring acting as "lumberjerks."

During the bout, The Nexus simply couldn't help themselves. The seven deadly sinners climbed into the ring to confront Cena and "Hit Man." Confident they had the two where they wanted them, the numbers game tightened when John Morrison and R-Truth shot in to help their fellow Team WWE members. Then the seven deadly sinners appeared shocked when Edge & Jericho eventually turned to help their former opponents. In the end, The Nexus and Team WWE exchanged blows in a slice of what can be expected this Sunday at SummerSlam. 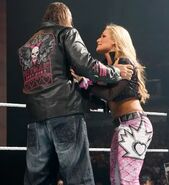 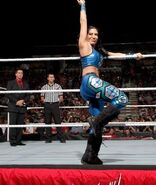 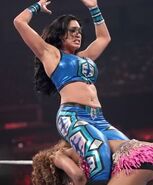 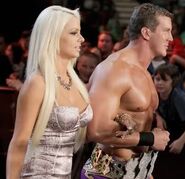 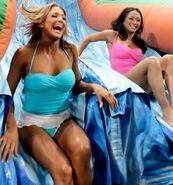 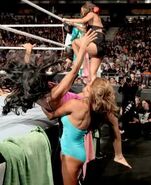 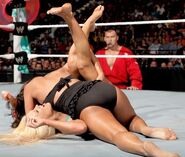 Retrieved from "https://prowrestling.fandom.com/wiki/August_9,_2010_Monday_Night_RAW_results?oldid=1630273"
Community content is available under CC-BY-SA unless otherwise noted.