The August 8, 2017 Edition of Smackdown Live is a Professional wrestling television show of the WWE's Smackdown brand, which took place on August 8, 2017 at the Air Canada Centre in Toronto, Ontario, Canada.

Following an out-of-control melee with Baron Corbin exclusively on WWE Network last week after SmackDown LIVE went off the air, John Cena kicked off tonight's show by addressing his loss to Shinsuke Nakamura. Cena quickly shifted his focus, however, as The Lone Wolf made his way onto the stage, and the two Superstars immediately started trading verbal barbs.

The heated exchange between the brash Corbin and the 16-time World Champion led to The Leader of The Cenation challenging Mr. Money in a Bank to an impromptu fight, though Corbin didn't seem too keen on the idea and started to make his exit.

However, SmackDown LIVE General Manager Daniel Bryan hit the scene to announce that the two Superstars would indeed settle the score in a one-on-one bout at SummerSlam!

With their chance to regain the SmackDown Tag Team Championship against The New Day at SummerSlam less than two weeks away, The Usos took on the formidable pair of Canadian countrymen Sami Zayn & Tye Dillinger on SmackDown LIVE.

Zayn and Dillinger put Jimmy & Jey back on their heels when Zayn launched himself over the top rope onto both of his adversaries, but The Usos prevailed after ruthlessly targeting The Perfect 10's knee, which led to Jimmy locking Dillinger in the Tequila Sunrise submission hold for the tapout win.

After the match, Jimmy & Jey got on the microphone and began “calling out” The New Day, whom they seemingly believed were still sidelined after The Usos’ attacked them from behind and left them in a crumpled heap on the stage several weeks ago.

But just when Jimmy & Jey thought they were in the clear, Big E hit the scene. The Usos seemed to be confused as to why only Big E arrived on the stage, but it was suddenly made clear when Kofi Kingston and Xavier Woods slid into the ring and attacked The Usos, with Big E joining in.

The Usos managed to escape, but not before The New Day got in a few licks and showed they were ready for their title bout at SummerSlam, baby!

After Lana informed Tamina last week that she wanted to be just like her, only more charismatic, beautiful and ravishing, Tamina's “protégé” competed against Charlotte Flair on SmackDown LIVE.

Unfortunately, the results were less than stellar for The Ravishing Russian, as Charlotte used her size and ring savvy to overpower Lana for most of the match. The Queen finished Lana off after dropping her with a devastating kick to the head and trapping her in the Figure-Eight Leglock for the submission victory.

With SmackDown LIVE Commissioner Shane McMahon slated to be the Special Guest Referee for the United States Championship Match at SummerSlam between AJ Styles and Kevin Owens, Shane-O-Mac wanted to address both competitors face-to-face.

A gamut of reactions was had, including an “apology” from KO, acknowledgment of the frosty past between Styles and McMahon, and Owens’ examination into Shane's checkered history as a Special Guest Referee with a clip from the award-winning WWE Network. Shane-O-Mac, who stated his intentions to call the title bout right down the middle at The Biggest Event of The Summer, did not appreciate any of the accusations being hurled his way from either The New Face of America or The Phenomenal One.

However, Styles didn't want to wait until SummerSlam and challenged Owens to an impromptu title match, but KO said he would rather win the United States Championship in the United States in a “city that actually matters.” A shoving match ensued, Shane tried to break it up, Owens landed a sucker-punch and Styles inadvertently drilled Shane in face with a Pele Kick, as KO laughed and made his exit.

In what could be an omen of what's to come in the SmackDown LIVE Women's division, Naomi took on Carmella in a non-title match. Carmella was in an uproar after Naomi had defeated her in tag team competition last week, and she wanted to even the score in tonight's singles bout.

Ms. Money in the Bank was certainly feeling the glow at several points throughout the contest, but the pivotal moment came when James Ellsworth (who's suspension ended late last week) appeared out of nowhere and threw Naomi off the top rope behind the official's back, allowing Carmella to defeat Naomi with a vicious superkick to the jaw.

The Princess of Staten Island and Ellsworth celebrated up the ramp with glee, as Carmella only continued to make her case that she is a legitimate threat to the SmackDown Women's Championship, especially as the cunning keeper of the Money in the Bank contract.

Randy Orton and Jinder Mahal rekindled their longstanding rivalry in a grudge match, competing against one another for the first time ever on SmackDown LIVE and for the first time since The Great Khali cost The Viper the chance to regain the WWE Championship from The Modern-Day Maharaja by interfering in their Punjabi Prison Match at WWE Battleground.

With great familiarity and the personal fire still burning strong from their battles over the WWE Championship, neither The Viper nor The Modern-Day Maharaja wasted any time in throwing down in the Team Blue main event. The two Superstars traded blows with great ferocity, and with The Singh Brothers recovering from recent injuries and not in the arena, Orton broke through by reversing Mahal's Khallas into a ring-shaking RKO outta nowhere for the win.

The Apex Predator didn't have too long to celebrate, however, as his SummerSlam opponent, Rusev, suddenly bolted onto the stage and blindsided him with a devastating kick to the head, leaving The Viper down as SmackDown LIVE concluded. Orton may have vanquished one foe, but a new challenge clearly awaits. 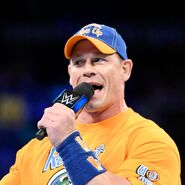 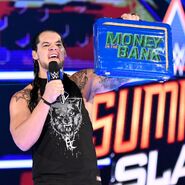 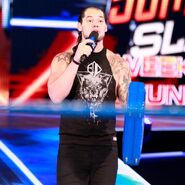 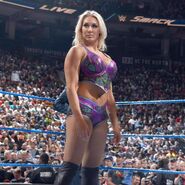 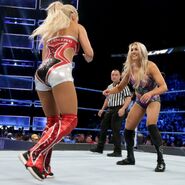 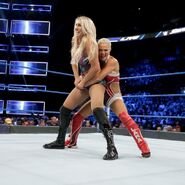 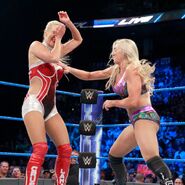 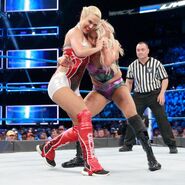 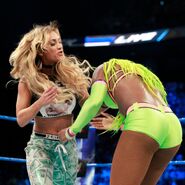 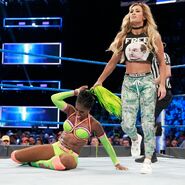 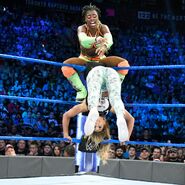 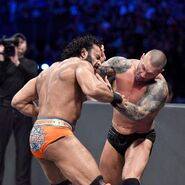 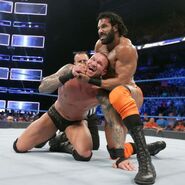 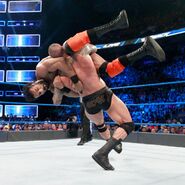 Retrieved from "https://prowrestling.fandom.com/wiki/August_8,_2017_Smackdown_results?oldid=1551934"
Community content is available under CC-BY-SA unless otherwise noted.