The August 7, 2017 Edition of RAW is a Professional wrestling television show of the WWE's RAW brand, which took place on August 7, 2017 at the Air Canada Centre in Toronto, Ontario, Canada.

The Miz was not happy that Jason Jordan showed him up on “Miz TV” last week, and he opened Raw by attempting to hold the show hostage until Raw General Manager Kurt Angle sent his son out for another sit-down. And while Angle did sanction Jordan vs. Miztourage member Curtis Axel for later in the night, he had another guest in mind for Miz: Brock Lesnar.

Hiding behind The Miztourage, the Intercontinental Champion didn't even let Paul Heyman deliver his famous introduction before he tried to call The Advocate's bluff on his proclamation last week that Lesnar would leave WWE if he loses the Universal Title at SummerSlam. This was a mistake.

Once Heyman got the mic back, he invited Lesnar to gave the audience a “preview of SummerSlam” by treating The Miz and The Miztourage the same way he plans to treat his challengers: With a bevvy of suplexes, a trio of F-5s and a triumphant walk through the ruins.

Say what you will about Dean Ambrose; the man keeps his promises.

The Lunatic Fringe told Seth Rollins he was done bailing out his former brother-in-arms last week, and he stayed true to his word in emphatic fashion during The Architect's rematch with Sheamus on Raw. Whereas Rollins surprised the Raw Tag Team Champion last week, The Alabaster Gladiator reversed his fortunes in Round 2, pinning Rollins with a roll-up of his own off an assist from Cesaro.

The cohesive Raw Tag Team Champions proceeded to lay a lengthy beating on Rollins after the match — one that only got worse when they realized that Ambrose would not be coming to the rescue.

One trip to Suplex City later, and Curtis Axel was a no-go for his scheduled match with Jason Jordan. Luckily for Jordan, a Quebec-born competitor named Jean-Pierre Goulet happened to be standing near Kurt Angle at the exact moment The Olympic Hero got an update from the trainers, so the Raw General Manager hot-shotted the local into his Raw debut against his son.

Unluckily for Goulet, he was little match for the “gold-blooded” wunderkind. Jordan used his amateur wrestling technique to toss his foe around the ring, and when Goulet showed a little fire, Jordan snuffed it out with his charge into the corner and Angle Slam-neckbreaker hybrid for the quick win.

It's official: The shoulder injury Bayley suffered last week will keep The Huggable One out of SummerSlam, which means the field for Alexa Bliss’ Raw Women's Title is wide open. And Bayley's preferred substitute — Sasha Banks — got one step closer to Little Miss Bliss only moments after Bayley addressed the WWE Universe and bowed out of contention.

In the first of two Triple Threat Qualifying Matches, The Boss surged past Alicia Fox and Emma, though the Australian grappler proved her mettle as a persistent foil to Banks throughout the match. Not only did Emma nearly take Sasha out of commission by targeting her back, but when The Boss locked Fox in the Bank Statement, Emma rolled her off into a pinfall attempt. Some quick thinking from The Boss, however, landed Emma in the same hold, this one good enough to earn the tapout victory.

Enzo Amore & Big Show have struck up quite the partnership lately, but Big Cass isn't about to let his two most persistent foils move past him so easily.

The seven-footer made his presence known during Enzo & Show's bout with Luke Gallows & Karl Anderson on Raw, distracting The World's Largest Athlete at a crucial juncture and allowing The Suntan Biker Man to boot Show off the apron. Anderson finished off Enzo and the “good brothers” ceded the ring to Cass, who got a few big hits in on the giant before Enzo struck, luring Cass into a game of cat-and-mouse that landed him square in the path of another vicious KO Punch.

A riled-up Cass demanded a match with Big Show at SummerSlam once he came to, and after a brief confab with Kurt Angle, they settled on a way to keep Enzo from interfering: They would suspend him above the ring in a Shark Cage.

Despite Finn Bálor getting the better of Bray Wyatt last week, the Irish Superstar admitted The Reaper of Souls “gives him the creeps.” Which isn't to say he's wary of throwing down against the former WWE Champion.

Bálor vowed to “finish” whatever Wyatt wanted to start, at which point The Eater of Worlds appeared in the ring. Finn was ready, materializing atop the ring post when Wyatt arrived, outmaneuvering his foe and teeing him up for a dropkick into the corner. Wyatt vanished before Bálor could strike, however, appearing on the TitanTron and promising to drag Bálor, and his Club, down before long. It was later announced that he would have just such an opportunity ... at SummerSlam.

Say what you will about Seth Rollins; he won't leave a man hanging.

Despite Dean Ambrose refusing to come to The Kingslayer's aid after his match against Sheamus, Rollins lent Ambrose a hand after The Lunatic Fringe found himself in hot water of his own with the Raw Tag Team Champions. The main difference was that Ambrose had won his match, an epic, scientific affair with Cesaro wherein the two Superstars traded a wide array of old-school holds and locks before they broke out the heavy artillery.

Down to the wire, The Lunatic Fringe won off a roll-up, and when the champs swarmed him, Rollins arrived to drive them back. Ambrose was seemingly won over by The Architect's actions and offered him the customary Shield fist bump, but Rollins left him high and dry this time around. Turnabout is fair play.

Akira Tozawa's shoulder is all healed up, and SummerSlam is on the horizon. And it looked as though Ariya Daivari, who lost out on a SummerSlam WWE Cruiserweight Title opportunity after being defeated by Tozawa, might give The Stamina Monster hell to pay in their rematch on Raw.

Despite an attempt by Neville to worm into his challenger's head backstage, The Powa of Tozawa shows no signs of fading. And even though The Persian Lion attempted to re-aggravate The Stamina Monster's shoulder, the Japanese Crusierweight put on a clinic that concluded with a suicide headbutt and a top-rope senton for the 1-2-3.

Nia Jax and Alexa Bliss’ burgeoning friendship may be put to the test sooner rather than later.

Jax left Mickie James and Dana Brooke in ruins in the second Triple Threat Qualifying Match of the night, setting herself for a bout with Sasha Banks next week that will determine Little Miss Bliss’ challenger at SummerSlam.

With The Boss watching on a monitor backstage and Bliss at commentary, Jax withstood a coordinated attack from both the veteran James and the upstart Brooke, but Jax emphatically turned back her opponents by clotheslining Dana into the ropes and executing a fateful leg drop on Dana for three. Banks vs. Jax next week. SummerSlam title opportunity on the line. Once again, may the best woman win.

The Great White North was shaken to its core in Raw's hellacious main event between The Big Dog and The Monster Among Men, as the two Superstars inflicted an unimaginable amount of damage on one another just two weeks before challenging Brock Lesnar for the Universal Title along with Samoa Joe in a Fatal 4-Way Match.

Reigns hit Strowman with the steel steps and Samoan Dropped him through a table. Strowman replied by fast-balling a chair into Reigns’ face and driving him back-first into the LED board when their brawl spilled onto the stage. Reigns finally seemed to have the upper hand when he Speared Strowman down the ramp and made it to his feet, only for Samoa Joe to emerge from the crowd and lock in the Coquina Clutch, putting Reigns to sleep and stopping the count.

The official had no choice but to restart the count once Joe finally released the hold, and The Gift of Destruction took advantage of Joe's interference. Strowman rose to his feet at eight to claim the win, but it was Joe who had the most ominous words of the night to Roman: “The yard is on lockdown.” 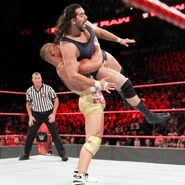 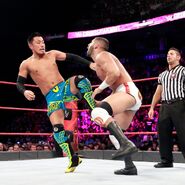 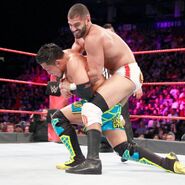 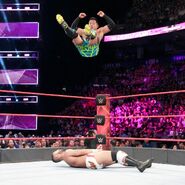 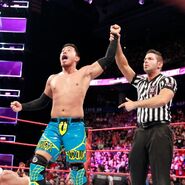 Retrieved from "https://prowrestling.fandom.com/wiki/August_7,_2017_Monday_Night_RAW_results?oldid=1551928"
Community content is available under CC-BY-SA unless otherwise noted.