The August 31, 2010 Edition of NXT is a Professional wrestling television show of the WWE, which took place at the Times Union Center in Albany, New York.

The WWE Pros and all eight season two NXT Rookies returned for the season two finale Tuesday night. Hoping to make a last-minute impact on the WWE Pros’ vote, Alex Riley joined his WWE Pro, The Miz, in a verbal assault on fellow NXT Rookies Kaval and Michael McGillicutty.

By the end of the evening, two of the final three NXT Rookies will have persevered the entire season, only to lose the competition in a double elimination, while one will become WWE's next breakout star. The winning NXT Rookie will earn a pay-per-view match against the champion of his choice.

The final three NXT Rookies put their in-ring skills to a final test in a Triple Threat Match. Alex Riley stole a win from Kaval in the season finale, pinning McGillicutty. Riley increased his final NXT Rookie record to 5-4, while McGillicutty's dropped to 6-4, and Kaval's finished at 3-6.

After the WWE Universe's votes were combined with those of the WWE Pros, the NXT Poll results were revealed and despite his win earlier, Alex Riley was the latest NXT Rookie to be eliminated.

The final two NXT Rookies came face-to-face one last time before the final NXT Poll results were revealed. Kaval and Michael McGillicutty each explained to the WWE Universe and the WWE Pros why he should be WWE's next breakout star and the winner of season two of WWE NXT.

The final NXT Poll results were revealed, and Kaval is the winner of season two of WWE NXT! The in-ring warrior, who has been wowing the WWE Universe with his impressive arsenal of martial arts-inspired moves all season long, earns a match against the champion of his choice at a future WWE pay-per-view.

Kaval's celebration with his very proud WWE Pros, Lay-Cool, was cut short, though, when the seven eliminated NXT Rookies – including runner up Michael McGillicutty – went on the attack. The assault by his fellow season two NXT Rookies left the WWE Universe and the WWE Pros stunned.

The WWE Universe and the WWE Pros have crowned its newest Superstar! NXT Rookie Kaval has won season two of WWE NXT and is WWE's next breakout star. 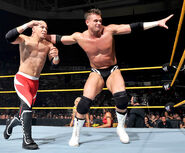 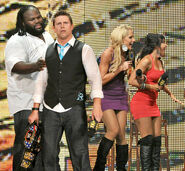 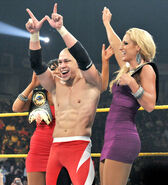 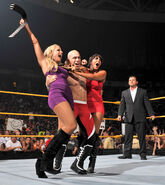 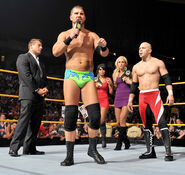 Retrieved from "https://prowrestling.fandom.com/wiki/August_31,_2010_NXT_results?oldid=1551912"
Community content is available under CC-BY-SA unless otherwise noted.