The August 30, 2017 Edition of NXT is a Professional wrestling television show of the WWE, which took place at the Full Sail University in Winter Park, Florida on August 24, 2017.

NXT opened on a chaotic scene in the Full Sail University parking lot, where cameras caught the aftermath of a mysterious attack on SAnitY and NXT security guards. Percy Watson speculated that the ambush was committed by dangerous interlopers Adam Cole, Bobby Fish & Kyle O’Reilly.

It was against that ominous backdrop that new NXT NXT Champion Drew McIntyre appeared in the ring for the first time since TakeOver: Brooklyn III, where he won the title but also fell victim to Cole & Co.’s sneak attack. Acknowledging the target his back, McIntyre issued a mission statement. He said he’s willing to defend the title against anyone who is man enough to stare him in the eye and challenge him to a fight.

Enter Roderick Strong. With his long-awaited grudge-settling match against former NXT Champion Bobby Roode scheduled for later in the hour, The Messiah of the Backbreaker made his championship ambitions known. McIntyre seemed to welcome the challenge, which he said was issued “like a man.” But he also warned Strong that he'd better get ready to “be knocked out like a man.”

After Ruby Riot topped Billie Kay two weeks ago, The Iconic Duo stopped at nothing to prevent Riot from beating Peyton Royce tonight in singles action. Riot took the lead early, but a distraction by Kay allowed Royce to claim a near-fall off a Death Valley Driver. Riot fought back, powerbombing Royce and then taking out both Kay and Royce with a two-for-one tope suicida.

Royce attempted to get away from Riot after that, and in doing so distracted the referee's attention. Just then, Kay yanked Riot out of the ring and booted her in the face, making her easy pickings for Royce, who pinned the dazed Riot after a superfluous fisherman suplex.

If Heavy Machinery approached the ring like a job site, then Damien Aweel & Edwni Negron were the unwitting earth about to be torn and shredded, stomped and compacted by Tucker Knight & Otis Dozovic.

Dozovic plowed through Aweel with a shoulder tackle before tagging in Knight, who cross body-blocked and avalanched both Aweel & Negron. Dozovic re-entered the fray to assist Knight with hitting the Compactor on Negro onto Aweel. The result was a massive pileup, under which Aweel lay pinned, defeated and no doubt relieved that Knight & Dozovic know when a job is done.

Knowing that this would be his final chance to settle the score with former NXT Champion Bobby Roode before Roode joins SmackDown LIVE full-time, Roderick Strong unleashed all his rage on The Glorious One. The Messiah of the Backbreaker nailed one vertebrae-breaker after another, giving Roode's chiropractor fodder for nightmares.

Roode took control after a spinebuster on the floor and, late in the contest, drilled Strong with the Glorious DDT. Yet, Strong survived the pin attempt by draping his foot on the bottom rope, recalling the way Roode narrowly avoided losing the NXT Title to Strong in July. Perhaps remembering all of the personal insults that The Glorious One said about his family, Strong found a new gear and, after connecting with several knee strikes, tossed Roode with back-to-back End of Heartache backbreakers, winning the match and ending one of NXT's most bitter rivalries.

Drew McIntyre then came to the stage and pointed in Strong's direction, seemingly indicating that he considers Strong worthy of a title opportunity after his hard-fought win. Suddenly, McIntyre was jumped from behind by the hell-raising triumvirate of Adam Cole, Kyle O’Reilly & Bobby Fish. Cole DDT’ed the NXT Champion onto the ramp, and the trio batted away security guards before exiting through the crowd. All three brashly declared that NXT now belongs to them as they walked out of the building, leaving NXT General Manager William Regal to fume over their actions. 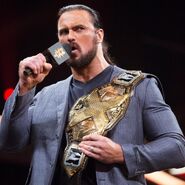 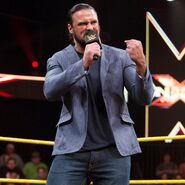 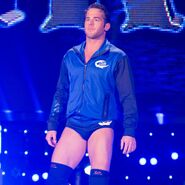 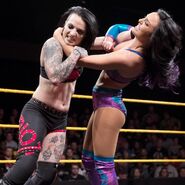 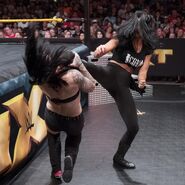 Retrieved from "https://prowrestling.fandom.com/wiki/August_30,_2017_NXT_results?oldid=1551911"
Community content is available under CC-BY-SA unless otherwise noted.