After starting his career on SmackDown, John Cena came to the ring at the historic start of a live SuperSmackDown and talked about hurting WWE Champion Alberto Del Rio. But Ricardo Rodriguez informed Cena he'd have to wait until Night of Champions for the honor of being in the ring with him. Putting a punctuation mark on Rodriguez's statements, Cena dropped him to the canvas. Next, Wade Barrett emerged to talk smack about his upcoming match with Cena. But, the Cenation leader got in the last word: “Get this through your head … you have made my life miserable and I owe you some payback."

With his sights set on WWE Champion Alberto Del Rio at Night of Champions, John Cena made quick work of Wade Barrett, defeating him with an Attitude Adjustment in the night's first match.

When Mark Henry was asked by Matt Striker about facing the winner of the night's Steel Cage Match at Night of Champions, he said “I don’t care who wins … either way, they'll be a candidate for the 'Hall of Pain.'"

The second match of the night featured a contest between two of WWE's most athletic Superstars. Although both Superstars pushed themselves to the limit, it was a quick combination of moves from the ropes that spelled victory for Sin Cara. In an apparent gesture of good sportsmanship, Sin Cara shook Byran's hand while he was on his knees. But then in an ugly display, the international sensation blasted Bryan with a kick to the head.

In a dominating display the "Divas of Doom" took care of business against Kelly Kelly and Alicia Fox when The Glamazon dispatched of Fox with a debilitating Glam Slam.

After exchanging emotional and heated words, it looked like CM Punk and Triple H might come to blows before their Night of Champions match. But before things came to a head, Kevin Nash charged to the ring. With Punk seething, the COO kept him at bay. But when Triple H lost control, Punk and Nash collided, with Punk getting a massive boot to the face. Then in a stunning move, Nash dropped Triple H to the canvas with a demonstrative show of force. The contract chaos begs the question: Has Triple H lost complete control? After the mayhem, Nash refused comment to Matt Striker.

When Jinder Mahal attacked Sheamus from behind, The Celtic Warrior picked up an immediate win over The Great Khali by disqualification. But afterward, Sheamus felt the vicious effects of The Khali Chop, followed by a painful assault by Mahal outside the ring. But the Irish Superstar had the last laugh when he absolutely demolished Mahal with the Celtic Cross in the ring.

With his World Heavyweight Championship on the line, Randy Orton fought tooth-and-nail with a hard-charging and determined Christian. As both Superstars battled atop the cage then the top rope, the champion dropped Christian with a blistering RKO for the win. But before Orton could relish in his win, No. 1 contender Mark Henry rushed to the cage.

The most dangerous man in WWE then went to work dismantling The Viper by bashing him skull-first into the steel cage, clotheslining him then finally finishing him off with a brutal World's Strongest Slam. With WWE's Apex Predator at his feet, Henry hoisted his title high. Was the night a sign of things to come with both Superstars on an imminent collision course? 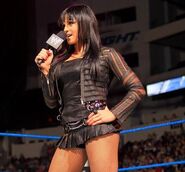 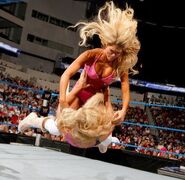 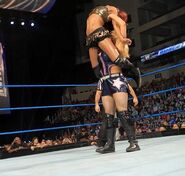 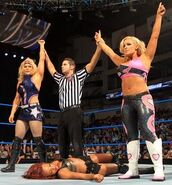 Retrieved from "https://prowrestling.fandom.com/wiki/August_30,_2011_Smackdown_results?oldid=1655088"
Community content is available under CC-BY-SA unless otherwise noted.