The August 30, 2004 Edition of RAW is a Professional wrestling television show of the WWE's RAW brand, which took place on August 30, 2004 at the Cow Palace in San Francisco, California.

According to Triple H, Randy Orton's success is a product of The Game's tutelage and being a member of Evolution. Orton would be absolutely nothing if it wasn't for Triple H's influence. On Monday night, the World Heavyweight Champion did not necessarily disagree. Orton claimed that he did, in fact, learn from Evolution. One of the most important lessons he learned was to never let anybody know what he is thinking.

Orton's claims infuriated The Game. Then Orton managed to make Triple H even more upset. The World Heavyweight Champion showed a picture of himself pinning Chris Benoit for the title at SummerSlam - something Orton did all by himself, and something that Triple H has never done.

The cocky World Heavyweight Champion then told The Game that he wanted a piece of him right then and there, however, Orton was out-manned, as Triple H had Batista and Ric Flair with him. In an attempt to even the score, Orton did something very Triple H-esque - he brought a sledgehammer to the ring. All members of Evolution quickly retreated to safety. But that wasn't the last time Evolution would run into the sledgehammer-wielding Randy Orton on Monday night. During the night's main event, pitting Triple H against Eugene in a no disqualification battle, Orton attacked The Game, leaving him easy prey for Eugene.

Last week, RAW fans were witness to the Wedding From Hell. One week later, Kane had a surprise for his new wife, Lita. His surprise - the Hardy boys. No, these Hardys were not actual members of Matt's family. Rather, they were imposters clearly brought in by Kane. In an act of rage, Kane decimated all four fake Hardys - Pat, Nat, Rat and Fat Hardy.

One surprise deserves another, as Lita alerted her new husband to a shocking development of her own. With their new union, Kane and Lita are now partners, which means they can make decisions for each other. This bit of information became very important when Lita went ahead and signed Kane up for a match at Unforgiven. His opponent - Shawn Michaels.

Christian is back! The former Intercontinental Champion made his presence felt during the Highlight Reel. After Edge told Chris Jericho that he could not compete at Unforgiven due to a sever groin injury suffered over the weekend, Christian took to the ring and Pearl Harbored Y2J. Not anticipating the attack, Jericho didn't stand a chance, as Christian tore the Highlight Reel host apart.

One of the final five $250,000 RAW Diva Search contestants was eliminated. Filling in for an injured Jonathan Coachman, Stacy Keibler alerted Maria that she was no longer a part of the contest. After the announcement, the final four contestants went on profanity-laced tirades, berated each other. 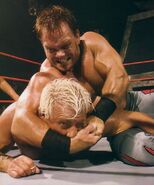 Retrieved from "https://prowrestling.fandom.com/wiki/August_30,_2004_Monday_Night_RAW_results?oldid=971046"
Community content is available under CC-BY-SA unless otherwise noted.