August 10, 2016
The August 3, 2016 Edition of NXT is a Professional wrestling television show of the WWE, which took place at the Full Sail University in Winter Park, Florida on July 13, 2016.

Hideo Itami made his long-awaited return to the ring and the Japanese striker did not disappoint. In his first match back in more than a year, Itami was faced with newcomer Sean Maluta, who was making his NXT debut after being knocked out of the first round of the Cruiserweight Classic by tournament favorite Kota Ibushi. On hand to witness the contest were Maluta's fellow Cruiserweight Classic competitors Zack Sabre Jr., Tony Nese and Drew Gulak, all of whom are going on to the tournament's second round.

Inside the squared circle, in the face of Maluta's aggressive attack, Itami showed little to no signs of ring rust, unleashing his rapid-fire strikes on an overwhelmed Maluta. In the end, Itami prevailed after hitting a running knee for the pinfall.

SmackDown Live's Mojo Rawley looked to be on the verge of an extremely quick victory after barreling over his opponent, before NXT Champion Samoa Joe interrupted the referee's pinfall and attacked Rawley and Chris Atkins. The titleholder then made it clear his actions were in response to General Manager William Regal's decision to name Shinsuke Nakamura his NXT TakeOver: Brooklyn II opponent without consulting him first.

Before Joe could finish his message, Rawley returned with a vengeance, taking down the Samoan Superstar. The hyped-up Superstar made a costly mistake, however, as he turned his back on Joe, who then stalked Rawley up the ramp before locking him in the Coquina Clutch.

NXT Women's Champion Asuka literally provided Bayley with a ringside seat to her match against Aliyah. In return, Bayley threw the chair aside and stood as Asuka devastated Aliyah with her lethal strikes.

The bold titleholder played mind games with Bayley throughout the contest, even at one point cutting her pinfall attempt on Aliyah short. Finally, Asuka trapped her overmatched opponent in the Asuka Lock for the submission victory, but released the devastating hold only after Bayley came into the ring.

With tensions rising, what will go down next week when Asuka and Bayley sign on the dotted line to make their rematch for the NXT Women's Championship at NXT TakeOver: Brooklyn II official?

“The wait is finally over …”

Bobby Roode said it best when he made his first comments since arriving to NXT. The highly sought after free agent's cocky attitude was on full display in his first NXT address. While the NXT Universe was clearly ecstatic to see the former World Champion inside an NXT ring, that goodwill quickly went out the window when Roode started trashing the fans in attendance.

Roode predicted that the crowd at Full Sail Arena would soon be filled with presidents and vice presidents of Fortune 500 companies as he makes NXT a “better place.” The cocky competitor then went on to claim that he is now at the helm of the “new NXT” and from this moment forward NXT will be “glorious.”

NXT Tag Team Champions The Revival continue to talk a big game, but there are multiple tag teams chomping at the bit to challenge the confident duo. One of those teams is TM-61, who gave Scott Dawson & Dash Wilder a run for their money in the main event.

While the self-proclaimed best tag team on the planet managed to escape their hard-hitting opponents with a “W” by their name, thanks to a timely DDT by Dawson to Nick Miller, they wouldn't escape the evening completely unscathed.

After the contest, Tommaso Ciampa & Johnny Gargano interrupted the NXT Tag Team Champions’ victory speech, prompting fists to fly after the duos exchanged a war of words. Gargano & Ciampa further proved to be worthy challengers for the NXT Tag Team Titles by disposing of Dawson & Wilder and then standing with the coveted tag titles in the middle of the ring. Will Gargano & Ciampa get a chance to win the prized championship? 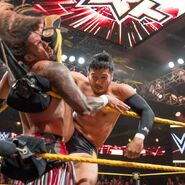 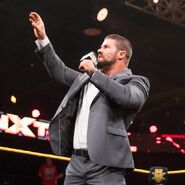