August 10, 2010
The August 3, 2010 Edition of NXT is a Professional wrestling television show of the WWE, which took place at the Laredo Energy Arena in Laredo, Texas.

The final six puckered up for an exciting, new NXT Rookie Challenge Tuesday night – a kissing contest. WWE Pros Lay-Cool wanted to see which NXT Rookie was the best kisser, though the competitors – to their chagrin – weren't kissing the “co-Women’s Champions.” Instead, Laredo's not-so-“Flawless” 1993 Homecoming Queen, Margarita, was the judge, and despite a strong effort by Alex Riley, she chose Lucky Cannon as the winner. Cannon didn't earn a special prize for winning the kissing contest, though he undoubtedly made an impression – albeit positive or negative – on the WWE Universe and WWE Pros.

Husky Harris continued to bulldoze through his competition on WWE NXT, defeating fellow NXT Rookie, Kaval, for the second time in as many weeks. The “Army tank with the Ferrari engine” lived up to his nickname, dominating a normally quick Kaval, then pinning him after a thunderous running senton. No. 6 ranked Harris’ proud WWE Pro, Cody Rhodes, congratulated his NXT Rookie following the match. Harris’ hot streak brought his record up to 4-2, while No. 2 ranked Kaval fell to the bottom of the pack in terms of win-loss records at 1-5.

Lucky Cannon and Michael McGillicutty – two NXT Rookies having scores to settle with The Miz – competed for the chance to face the WWE Pro. Recently, the United States Champion brutally threw Cannon into the Money in the Bank briefcase with the Skull Crushing Finale, and called McGillicutty a “mediocre” NXT Rookie. Yet it was McGillicutty who maintained his perfect record, quickly defeating Cannon with the McGillicutter for the opportunity to face The Miz in the main event. The No. 1 ranked McGillicutty improved his already flawless record to 6-0, while No. 5 ranked Cannon wasn't so lucky, moving to 2-5.

In WWE.com's recent NXT Rookie Confessionals, “Showtime” Percy Watson admitted the NXT Rookie he just can't get along with is Alex Riley. (WATCH) Hoping to teach the Varsity Villain a lesson about respect, the always-entertaining Watson put up a strong fight. But it was the increasingly impressive Riley who scored the win after hitting “Showtime” with You're Dismissed. No. 3 ranked Riley's record moved up to 3-2, while No. 4 ranked Watson's dropped to 2-4.

On a mission to prove he's anything but a “mediocre” NXT Rookie, Michael McGillicutty faced WWE Pro The Miz in singles action. It was the United States Champion who dominated, however, showing no remorse or mercy toward the No. 1 ranked NXT Rookie. Despite a resurgence by McGillicutty toward the end of the match, it was The Miz who emerged victorious, hitting the NXT Rookie with the Skull Crushing Finale. No longer perfect, McGillicutty's record dropped to 6-1.

With the NXT Poll less than 24 hours away, the NXT Rookies left the WWE Universe and the WWE Pros with a lasting impression. Some made an impact with their in-ring skills, while others were commended for their kissing abilities! 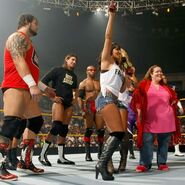 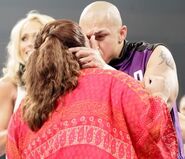 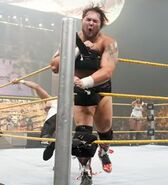 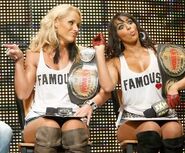